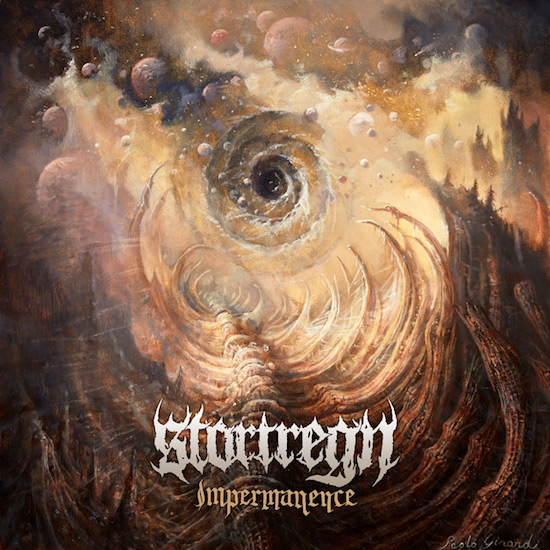 Leave it to The Artisan Era to pluck a band that had completely flown under the radar and thrust them into my regular listening rotation. At first you aren’t really sure what this is trying to be. Is it another wanky Inferi clone? A more progressive version of Insomnium, or perhaps a more technical Be’lakor? Early Cynic reimagined for the modern era?

It’s only when you get halfway through Impermanence and feel like it just started that you realize Stortregn is much, much more than the sum of whatever their influences are. This is a twelve-star buffet of guitar noodles stringing you in every which direction, yet they seem to know exactly how long to stick around before they wear out their welcome. There are epic riffs, catchy riffs, techy riffs, beautiful riffs, all garnished with delicious bass noodles, powerful roars, and drumming with fills that are as smooth as room-temperature butter.

Normally I’m not big on the “everything and the kitchen sink” approach to music in general, I tend to prefer it when sounds are integrated, but Stortregn are master songwriters, with a chemistry and necessity to the way one section of a song flows into another. They overlap tracks frequently, using a lull in energy to shift into the next movement, creating that “full album” feel as the ups and downs are strung between the songs. The careful balance between the Naglfar/Dissection-esque melodic black metal, the progressive melodic death, and the slick fretboard mastery constantly keeps the unexpected coming at you with the entire album constantly adding a new movement to the story. Stortregn try a little bit of everything on this album and they nail whatever they attempt - they’re the jack of all trades with a few aces up their sleeve, and they’ve structured the full album in a way that you’re always simultaneously enjoying the moment you’re in and looking forward to what’s coming up next. I can listen to Impermanence three times in a row and pick a different element to dial in on each time around, thoroughly enthralled the entire time.

There are a few things that set Stortregn above the pack of bands that attempt this type of approach. For one, the chemistry and give-and-take between the band members is done perfectly. You can tell every single one of these guys are extremely talented, but they each take turns giving each other the spotlight. Sometimes the focus will be on the guitars - every song has like a minimum of six solos and 9 times out of 10 they’re filthy. Sometimes, the bass will make its way into the foreground, sometimes the vocalist’s roar with incredible resonance and duration forces its way in, and occasionally the drums pull out a jazzy backbeat that catches your attention, in attention to the smooth, efficient blasting with lots of texture keeping the songs moving - the extended section in 'Timeless Splendor' being a notable example (the bass lick in that part is quite sexy as well).

Really, if I keep going, every song is going to be mentioned because all of them have something that makes me go “shit that was cool” at least once. I am thoroughly floored I have never heard this band before, and I am going to have to binge on their discography now because for an extreme metal nut like myself, this is a smorgasbord of delicious music that is both insatiably addictive and multifaceted enough to keep me coming back for a long time. I will be very surprised if this isn’t still in my regular listening rotation by the end of the year. Yet another home run from this fantastic label, and what luck, Stortregn has four albums before this I have to catch up on now!