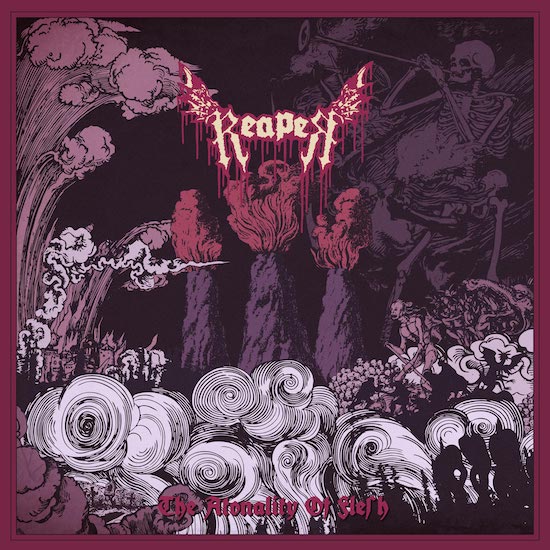 Type: Full-Length
Release Date: March 5th, 2021
Label: Iron Bonehead Productions
Genre: Black, Speed
1 Intro
2 Dogs Of The Crumbled Firmament
3 The Sweetness Of The Wound
4 Come Nature, Come Cruelty, Come Death
5 Nightgaunts
6 Raid The Heavens
7 Saturn Devours
8 Architecture Of The Flame
9 Me, You And The Juices Of Death
10 Thru With You
11 Rise Epimetheus
12 Piss, Bile And Violence
13 Outro
MetalBite on YouTube

I have rather a hazy memory of Reaper’s debut. As far as I remember, it sounded ridiculous due to the totally distorted, wannabe evil mix. The teething problems are not completely surmounted yet, the stupid intro provides evidence in this context. But generally speaking, The Atonality of Flesh almost sounds like music… On a more serious note, the mix is still noisy, sick, inhuman and equipped with a very vicious touch. The nagging vocals embody aggression, hostility and contempt, guitar, drums and bass (is there a bass guitar at all?) create something that can be described as an overlong air raid alarm (if we neglect the absolutely senseless intermezzo on the fifth position). The instrumental 'Saturn Devours' underlines this statement. The guitars and drums do not have to take care for giving the vocals an adequate place and so they take a wild ride through the devilish fields of disharmony and, well, atonality.

The 13 tracks combine anarchic chaos with underground dogmas. At first glance, this might be a contradiction. But the underground itself does not know many more dogmas than “do what thou wilt” and “f**k commercialism”. Thus, Reaper cannot go wrong. They spit in the face, they trample their enemies into dust, they dance on graves. And, of course, they like to celebrate their noise attack in a pretty primitive way. The band name indicates a weakness for Bathory, especially the debut, and sometimes the spirit of this album really shimmers through. The beginning of 'Thru With You' delivers one of these moments. It is surprising again and again how many formations find their inspiration in the works of Bathory. Doubtlessly, “Bathory” and “The Return…” did not lack misanthropy in its purest and best form. But the debut was released in 1984 and to keep the old formula alive does not guarantee success per se in 2021. In addition, Reaper are not immune against crossing the line to triviality every now and then. 'Piss, Bile and Violence', the “epic” track with a length of more than six minutes, is much too long. Unfortunately, the song just does not come to an end, although everything is said and done after three or, if we want to be generous, four minutes.

I regret that the Swedes forgot to integrate more morbid elements. The focus on absolute vehemence has led to a pretty one-dimensional, almost flat album. Yes, there are some good songs to find here and The Atonality of Flesh does not steal you 38 minutes of your life. However, I have the feeling that the unbridled duo wastes its potential to a certain extent. If they would design more cruel eruptions of sheer hatred on the one hand, but some insidious pieces with an evil atmosphere on the other hand, they could create a better flow and take the next step. Up to now, Reaper is nice to know, but no name that fascinates me sustainably.