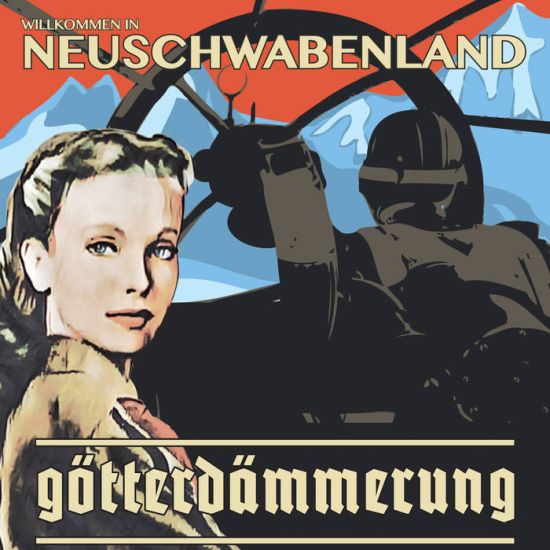 It was in 1939 when the German Antarctic Expedition discovered Neuschwabenland (New Swabia) and it remains a mystery why the Nazi propaganda did not make a hype about this fact. Maybe the dude with the clubfoot had better things to do, for example f**king Lida Baarova, the nice actress from Czechia. We don’t know it exactly… but speaking of Czechia helps us to get closer to Götterdämmerung. Despite their German name, they originate from Lida’s homeland, and they seem to have a weakness for the aesthetics of the Nazi period. Or am I misled by the artwork with the slogan “Willkommen in Neuschwabenland” and the “Bund Deutscher Mädel”-girl staring at me? And why was the output released on the 1st of September, exactly 81 years after the outbreak of World War II, the ultimate catastrophe?

Of course, all these speculations and open questions are not helpful. So let’s turn the cone of light on the music. Götterdämmerung rush over the icy fields of New Swabia with a breath-taking speed and sometimes they somersault ('Talvisota'). 5% less hysteria would have been a fine thing here. But if we take a close look at the big picture, we realize that there is not much to grumble. Neuschwabenland presents fresh, merciless, rude and mostly absolutely uncompromising thrash. The dudes are not overly influenced by the American pioneers from the eighties and the early material of the German role models such as Kreator or Destruction also does not really shimmer through the nine songs. The first seven songs and the closer are a thrashing bloodlust without a retrospective approach. But the title track stands in sharp contrast to these short, brutal and almost chaotic eruptions.

Suddenly, mesmerizing guitars roll out the red carpet for a narrator who tells the story of, well, the Neuschwabenland expedition in German. He uses almost poetic words, something like “New Swabia, where darkness covers the snowy landscapes… kingdom of eternal ice” and so on, but this remains the only poetic aspect here. Anyway, the narration lies in close proximity to the historic truth and I feel an icy coldness creeping up my back. No doubt, thrash and high velocity should stand shoulder to shoulder, but this mid-paced number is a highlight of the album. This does not mean that the ultra-fast outbursts of energy stand in the shadow of the title track. 'Alfa Tauri' marks a strict, murderous and slicing attack with a brilliant bridge and further tracks advance into very high quality regions. For instance, enjoy the rapid, slightly modern-Sodom-like riffing of 'Trojný Bod' – especially its excellent instrumental parts that have the power to drive me mad.

The album was recorded in April 2020 and I hope (no, I’m sure) the dudes did not celebrate Führer’s birthday during the recording process. Firstly, because nobody should do this, secondly due to the fact that they had a better reason to party. The result of the recordings is a very aggressive, straight-in-your-face sound that fits the band’s musical way of proceeding perfectly, although the guitars dominate over the vocals. Götterdämmerung destroy, destroy and destroy again and in view of the quality of the compositions and of the sound, it’s a joy to witness this act of destruction. I still wonder about the dude’s focus on Germany (not only band name and album title, but also the musician’s sick pseudonyms like “Wunderpepi” or “Brummbär”), but this does not affect the quality of the recommendable album.