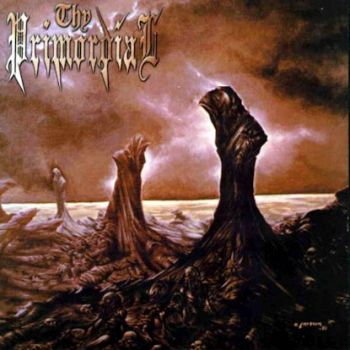 Type: Full-Length
Release Date: 2000
Label: Pulverised Records
Genre: Black
1 Ceased, To Decay
2 Ex Opere Operatu
3 Disguised As Beings Of Light
4 The Heresy Of An Age Of Reason
5 Mere Are They...
6 Tyrannize
7 The Enigma Of The Fall
8 The Dead Live / Shining Crown Of Night
MetalBite on YouTube

A long time ago, I began to listen to hard rock and metal (Kiss, "Talk to Me", slightly embarrassing, and AC/DC "Back in Black", much better) at the beginning of the eighties. Afterwards, I saw the first wave of thrash metal come and go. Then I witnessed the Norwegians and further dark creatures who filled the gap that the Bay Area left with the second wave of black metal. And now I just meander around, never knowing what comes next. Yet two things are for sure. Firstly, I have become very old and wrinkled. Secondly, sometimes it's a great pleasure to rediscover an almost forgotten album of times gone by.

So let's put the focus on Thy Primordial's full-length from 2000. These guys were not lazy, it was their fourth release during four years and perhaps this explains why the group acted like a well-oiled battle tank. The Heresy of an Age of Reason sounds fiery, deadly, a little bit rumbling but still all-terrain. Only ignorant fools do not realize in a matter of minutes that the protagonists originate from Sweden, because the black vehemence is combined with these typical Dissection melodies and vibes that one also finds in the fascinating art of Necrophobic, Setherial or (partly) Dark Funeral. There seems to be a unique chromosome in the DNA of Swedish black metal musicians. No matter how intense, brutal and negative it gets, a pinch of dark, capturing melodies is always included. Thy Primordial takes this specific feature to heart. This means that their relatively complex songs are - compared with those of their compatriots - not overly original, but they score with this devilish elegance I like.

Some special sections shine through the everlasting wall of sound. 'Ex Opere Operatu' offers an introduction that reflects desperate sadness, 'Disguised as Beings of Light' holds large-size, majestic lines and 'Tyrannize' delivers the best riff of the album, catchy and aggressive at the same time. All these elements are welcome, but, even better, the album works as a whole. Although the band has nothing in common with Mercyful Fate, the more or less occult artwork visualizes the music very well. Pure black metal spreads like incandescent lava, an unstoppable, natural force. Maybe the band should have shortened one or two tunes. Moreover, a few number of tracks is not easily accessible, but this is no big deal. The main thing is that integrity and homogeneity go hand in hand here and the result is a mostly furious black metal album which features, inter alia, the typical guttural vocals. The performance of the lead singer deserves the same description as the entire group and album: not pioneering, but passionate and simply good.

Swedish metal albums hardly suffer from a weak production and The Heresy of an Age of Reason joins the long row of powerful and brawny works. Even the very fast parts of the album do not sound blurred or unclean, but the recordings also do not show any signs of sterility. It's a pity that this band closed its rehearsal room forever after six records, because the dudes did not make many mistakes. Maybe the surplus supply of comparable formations sealed the fate of the here presented horde. Anyway, if you are interested in dexterously performed Swedish blackness, you will probably share my preference for Thy Primordial.