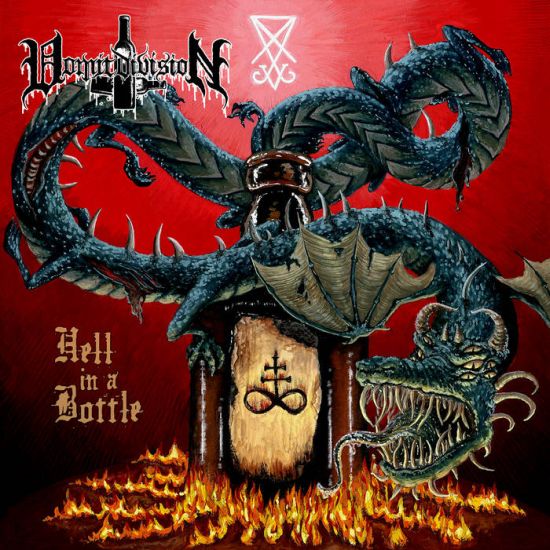 Did you celebrate the Rites of Vomit? Did you drink a glass of Nuclear Lemonade? Then you are qualified for the exploration of Hell in a Bottle. Even I, who missed the first two steps, can happily go exploring. So what are we waiting for? Let's start the adventure.

Vomit Division is another project run by only one musician. As a skeptical Teuton I am always suspicious at first when it comes to this kind of “bands”. But hats off, my compatriot from North Germany disproves my critical prognosis within a very short time. The extremely casually titled 'Panzerabwehr Rock'n Roll' blasts out of the speakers with elemental force and has exactly the dirty vibrations that make black thrash metal the most beautiful bastard on the globe. Speaking of bastards anyway, a track called 'Black Metal Bastards' opens the second half of the album. If Quorthon (R.I.P.) had given birth to a son, he would have enjoyed the sounds of this song. So assuming his father's genetic makeup would have been dominant. Okay, the lonesome fighter under the flag of Vomit Division is not too bad for a guitar solo and the young Quorthon never had much use for such frills. But there are other cornerstones that can be used to define the musical direction of Hell in a Bottle. The manginess of Deströyer 666 is reflected in the mix of bossy guitars and nasty sounding vocals. Furthermore, if someone likes the first record of Quintessenz from Germany, (s)he will also love the debut discussed here.

But Vomit Division also has weird tones in their portfolio. By this I mean that sometimes almost melodic sounds appear, for example at the beginning of 'Homunculus' or during a surprising break in the last song of the record. Even keyboards show up (for five or ten seconds…). In addition, there are also some rock'n roll elements in the material of the band, whereby I am of course talking about the extreme form of Rock. Lemmy, we miss you. But regardless of the exact recipe, it's positive that the multi-instrumentalist found a good mixture of simple riffs and relatively complex song structures. Well, maybe the songs are slightly too long for this kind of metal. Wifebeater’s debut “Misogynist” offered a comparable amount of dirt, but their nine-tracks-album clocked in at 28 minutes. Vomit Division needs more than 34 minutes for eight pieces, but generally speaking, the man who runs this project always keeps a close eye on the harshness and compactness of the tracks. Only a few sections meander into nowhere.

Finally, the lyrics deserve attention. 'Slaves of the Cock' or 'Cunts & Cocaine' not only promise delicate poetry, but also point out a healthy lifestyle. This gives us hope that we can expect more albums from this very sensitively formulating colleague in the near future. A blackened thrash album with a powerful, raw and direct production is always welcome – preferably in combination with a glass of cold nuclear lemonade.