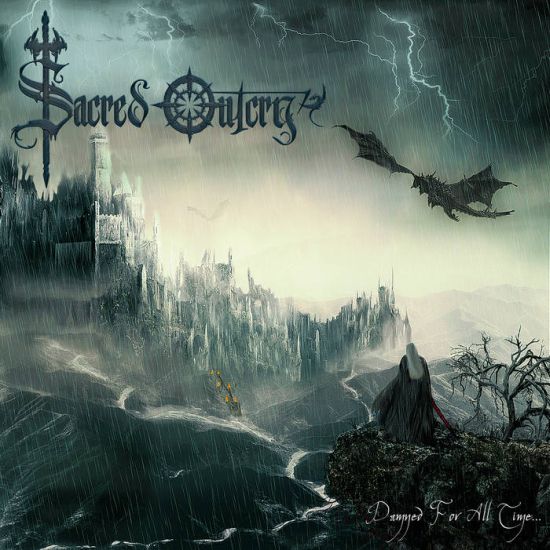 Dwelling in the darkest corners of the heavy metal forums sure has its perks. It can be a wonderful journey of discovery and exchanging suggestions with other like minded people from around the world and it is a shortcut from coal mining to striking gold. I didn't notice at once, but during my daily virtual walks I kept bumping into one name that was apparently burning the underground epic-power metal scene like a midsummer wildfire, so I decided to check them out. Sacred Outcry is not a new band, these are not new songs, this is not new power metal but oh boy I was in for a treat. With the element of surprise working in their favour, Sacred Outcry teamed up with No Remorse Records to unleash the perfect storm upon the epic power metal scene. I think it hardly does justice to categorize the album as power metal since that could mistakenly put them in the same bracket as all the smurf happy-go-lucky bands of our days, but you youngsters make no mistake, this album packs more punch than Saitama.

The album's imagery is breathtaking. This type of music thrives on big, epic visuals and this is exactly what I would have expected as it portrays their music to the fullest. Michael Moorcock's favourite anti-hero Elric, stands silent outside the walls of Immryr (?) ready to lay waste to all who oppose him. After the beautiful acoustic intro, we are greeted by the pure emotion of 'Legion of the Fallen' and it's a really unbelievable ride until the very last seconds of 'Farewell'. No fillers, no bullshit, every single track cuts deep and transports you to a time long gone by. A masterclass in song progression and idea placement and a near perfect execution from everyone involved.

The guitars dominate with excellent riffs and well executed solos that cover a very wide scope of technical prowess to straight up sing-along melodies. The reference point here would be the U.S. metal legends Warlord, as there are many points that the influence of Bill Tsamis is channeled through the pure emotion the solos convey, done very tastefully and with a peak sense of confidence. Special mention to the wonderful acoustic guitars that are excessively used and seem to be driving some songs forward with the absolute highlight of 'Scared to Cry', a modern day 'Bard's Song' (we need this played at Wacken with 20,000 people singing guys, come on!). I haven’t heard such a cool rhythm section in I don't know how many years, with the ever impressive thunderous drums laying the groundwork and the bass -perfectly audible- tightly driving the songs forward and even daring to steal the lead spot in some rare occasions (there are even a couple of cool bass solos, one of them a very not-so-subtle nod to Marcus Grosskopf). The overall ambiance is amazing as the orchestral arrangements manage to sneak by the massive wall of sound and offer some bone chilling moments, always adding to the songs and never taking the spotlight. All that backed by a very high production value that makes everything sound huge, fresh and on today's standards.

And of course, the vocals. I imagine Yannis Papadopoulos (Beast in Black) has about two hundred guest-singing requests every day but this time he chose wisely. The vocal lines are immaculately done and the attention to detail is insane, perfect meter, perfect rhyme and feeling right down to each syllable or vowel. Performances like this will eventually solidify him as one of the best singers of the new generation and it is performances like this that separate Sacred Outcry from the main bulk of NWOTHM stuff that usually suffer from good songwriting backed up by mediocre or straight up horrible voices. Please Yannis, if you ever read this, call the guys and tell them you want to do another album.

I will not go into further details on songs as this review is getting too big, but I will have to make a special mention to the 15-minute title track 'Damned for All Time'. We need more of these long epics, bands need to dare more and stop playing it safe (nothing wrong with safe but imagine if Eternal Champion wrote one of these babies!). The whole thing clearly showcases the craftsmanship and the way the band absorbed and honours its influences slowly progressing to the absolute highlight of the album and in my humble opinion the past 20 years of epic power metal. Elric finally accepts his fate and the epic conclusion to his story is courtesy of the Gods of inspiration throwing a thunderbolt of charisma, Yannis screaming his heart out (Eric Adams style) backed up by a choir chanting "Stormbringer". This is the absolute peak of creativity. THIS IS EPIC METAL.

I don't remember the last time I heard a newcomer with such a strong sense of identity or such high quality song-writing. The whole album has an unmatched sense of coherence and that's twice as impressive when you dissect the songs and notice that they do not follow a distinct pattern. This might be due to the fact that the material is 17 years old, so everything sounds so well distilled and well-thought-out that it seems impossible to find a flaw. The attention to detail is inhuman. This is a colossal effort and respect should be given where respect is due.

The album of the year.