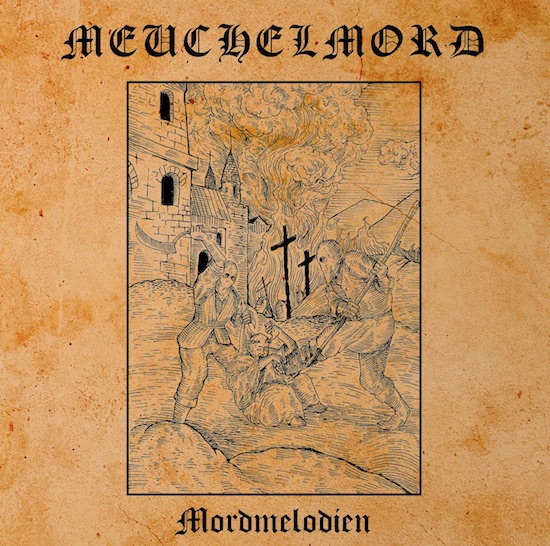 Cernunnos, the multi-instrumentalist who runs Meuchelmord, is not lazy. In 2019 he presented the strong Waffenträger album, in 2020 he released a new version of a former full-length and now he puts Mordmelodien on the table. In a nutshell, everybody who liked Waffenträger cannot go wrong with Mordmelodien. The artist did not change his approach and he still has enough good ideas in terms of song-writing. 'Waffenweihe', opened by blast beats and pointed guitars, is great during verse and chorus, but the surprisingly melodic instrumental part with the fantastic, everything controlling lead guitar makes the album’s first bone-crusher even better. 'Schwarzes Ehrenfeld' is in no way inferior to 'Waffenweihe'. It is similarly designed and devastates everything in its surroundings with strict lines, but melodic elements as well.

The Meuchelmord-man is not able to deliver tracks of this excellent degree exclusively. Slower tunes like 'Treibjagd' give the nagging voice more room to spread its vibes, but their class depends on the melodies and riffs. Admittedly, he does not only serve up delicatessen. 'Dem Ross zur Wehr' is absolutely convincing with its pretty relaxed tremolo picking and its excellent unfolding melodies, while the aforementioned 'Treibjagd' remains vapid. However, when having a look at the big picture, Meuchelmord have taken the next step. The songs do not differ in terms of style, but in terms of quality in comparison to those of 'Waffenweihe'. Most of them come to the point directly while scoring with a very exciting connection between hateful atmosphere and natural power. The entire album sounds evil and even the pretty melancholic riffing of 'Monument' darkens the sky. Cernunnos is not able to give the scene new impulses, but the scene is alive and healthy. It does not need a doctor and so it is more important that he has forged many stable tunes that do not lack class. By the way, 'In Ketten' belongs to these high quality pieces, among other things due to its brilliant break at 3:48 which adds a further aroma to the song.

Finally, the album is well produced. The mix is easily comparable with that of the full-length from 2019. Okay, the listener is not confronted with imperial heaviness, but with a sharp and stubborn vileness. Given this situation, only a few details remain mysterious. Why did Cernunnos select such a lame artwork after the very stylish one he used for Waffenträger? And is it a contractual obligation for each band of Purity Through Fire to play a song of another PTF combo at the end of the album – remember Mavorim’s Minenwerfer cover? I can only speculate. But what I do know is that I can recommend Mordmelodien without reservation.