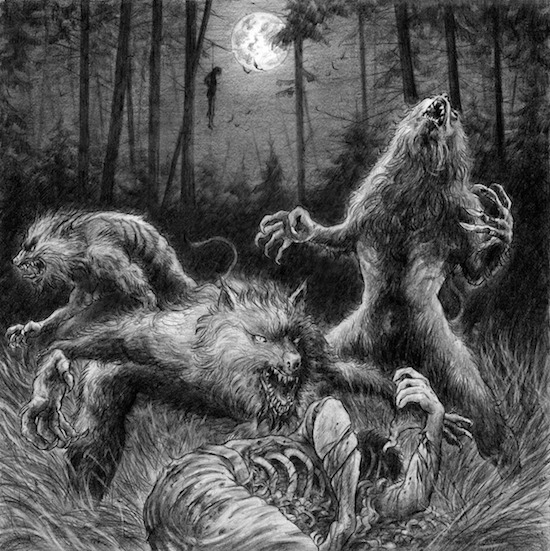 The trio called Szary Wilk originates from Poland and I am quite sure a patriot from this country wrote the promo, because it nominates only Polish bands as an influence. Especially Graveland's widely well-respected “Following the Voice of Blood” seems to be an important album for the promoter, but what about the band itself?

Well, when it comes to black metal with Pagan elements, five pretty long tracks do not promise an overdose of diversity. Surprising twists and turns are rare in a genre which loves to focus on epic monuments that live from repetitive, gradually almost hypnotizing sounds. Szary Wilk does not dare to break out of this scheme. Despite its comparatively harsh sound, the opener is like a long and silent river. Of course, there are worse things in life than a silent river, but there are also more interesting, more exciting things. Generally speaking, the band does not totally shy away from tempo shifts, but the use of this compositional mean does not lend the songs a dynamic frame. The dominating mid-tempo cannot rely on outstanding harmonies and the fast sections also do not hit the mark. 'Mortuos Voco', for example, offers a fairly rapid section whose guitar lines lack clear contours. From my point of view, the main problem of the Polish guys is their comparatively weak song-writing. The guitars create a flow and that’s okay, but their melodies fail to trigger (strong) emotions. Everything comes and goes without annoying or fascinating me.

Another feeble detail of the album is its production. It wants to impress the listener with its raw sound that attempts to establish a connection to the more or less glorious ancient days of Graveland, Veles and friends. One can credit it with a certain underground charm, but it lacks clarity and directness. After all, some riffs of the closer spread a pleasant nativeness, but the song suffers from its wannabe dramatic ending – and, irony of fate, here we finally are confronted with an unsuspected break, but unfortunately it does not work. Instead, the abrupt interruption with the narrator kills a lot of the power of this comparatively hefty number. So in my humble opinion, Szary Wilk still has a pretty long way to go. I’m sure the band does not lack talent, but it needs more than run-of-the-mill leads and average vocals which sound inhuman yet artificial. With that said, I am sorry for all Polish patriots.