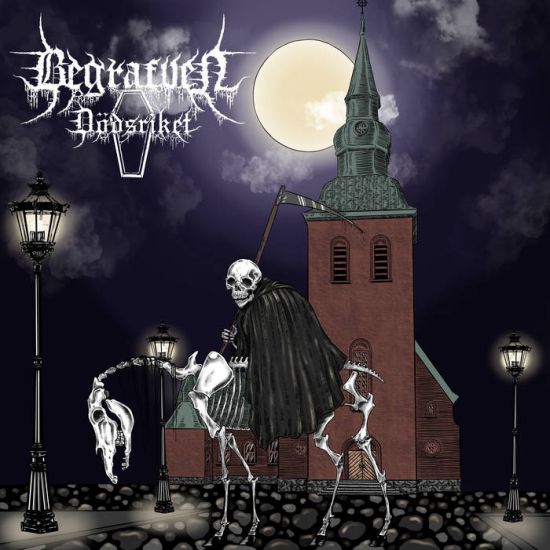 Long have I waited, but the band had problems with the pressing plant (according to their own statement) but now, after a few months of waiting, the Swedes of Begrafven have finally managed to release their album as a CD. Except for a demo, which the band released in 2013, there are no other releases. Let's see what Dödsriket has to offer....

First of all, the cover catches the eye of the disinclined viewer. I wonder what the band was thinking. This is one of the worst CD covers I have ever seen. Grim Reaper on a horse skeleton in front of a church. And drawn in Paint 1995 or so. I don't want to say that I am artistically very talented and could design such an artwork, but such a monstrosity as a cover???? Honestly???

But I was looking forward to the album not because of the cover, but of course because of the music. And that is, in contrast, really good. The album sounds like Swedish black metal sounds. There is nothing new on the album, but it is all played rock solid, the way I like to hear it. If I were to draw a comparison to similar bands, Sorhin or Armagedda would immediately come to mind. There are always nice instrumental passages in the tracks and the melodies are very catchy. The singer also sounds like a black metal singer should sound, he did not experiment with clear vocals or other bells and whistles. The production is quite well done, everything sounds coherent and you can hear the instruments well.

Recommendable songs are 'I Mitt Mörker', which is a very melodic piece and 'Livets Fort', which is a faster song and the band shows that they can write not only mid tempo numbers.

What in my opinion, however, somewhat disturbs, are the sometimes too long pieces. This could have been shortened a bit, after all, the album comes to a playing time of 1:09 hours. That is in my eyes much too long for a black metal album. All in all, however, it is quite a good album for a debut.