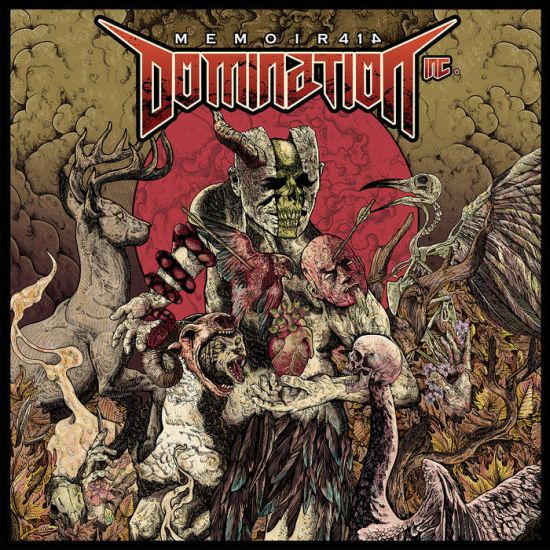 Somebody said that Greece is the new Bay Area and maybe this was not completely wrong. Domination Inc. is one of the bands from the cradle of European culture that swing the thrash axes in order to keep this generally fantastic style alive. They do not belong to these retro units that rarely match the quality of the old heroes while using their stylistic devices. The guitars are very fat in view of the modern production and the lead vocalist conveys an almost hardcore compatible rage with regard to his constant shouting. This idea works quite well, but unfortunately another one does not. The guys deliver a rather dragging number on the second position of the running order with a length of almost ten minutes. This song expresses rather pain and despair than thrash-typical energy. Honestly speaking, this was not the best idea, because the track hurts the flow of the album (as well as an inadequate break in 'Dark City') and the idols of the past would have never done such a thing. And even if you do not look in the rearview mirror all the time, you should avoid such an experiment.

Despite these unforced errors, one can say the album holds a sufficient number of vehement riffs and mighty moments. The temporary sound is both a blessing and a curse. Yes, it does not recreate the original thrash feeling, but it develops an appropriate degree of power. The musical approach has light and shadow as well. It’s a pretty modern interpretation of thrash with stomping, menacing and voluminous sections, but the genre-shaping jagged riffs of razor-sharp guitars do not mark the most prominent feature here. Songs like the partially speedy 'Dehumanized' do not lack edges and corners, but unfortunately this is no matter of course on Memoir 414. By the way, this piece reveals another little weakness of the material. Domination Inc. mostly fails when it comes to catchy choruses or further memorable parts. The song-writing needs optimization, even though the band does not act like amateurs. Guess you are beginning to understand the dilemma of these Greeks. It’s an album with a lot of grey spots – not bad, but without any chance to challenge the outstanding works of the subgenre. As much as I regret it, broad parts of the material remain expressionless.

The album ends with a Motörhead cover. From my point of view, one can do much better things than transforming 'Love Me Forever' into a kind of thrash ballad with raw yet whining vocals. Either way, let’s come to the conclusion: retro thrash is probably not an innovative force, but recording hefty yet partly incoherent tracks and calling them thrash metal is not the best idea as well. Domination Inc. has potential, but their compositions do not always come to the point and the monotony of the vocals are not helpful too. Maybe Greece is really the new Bay Area, but this full-length does not indicate this legal succession. Perhaps the next work will show the real class of Domination Inc.