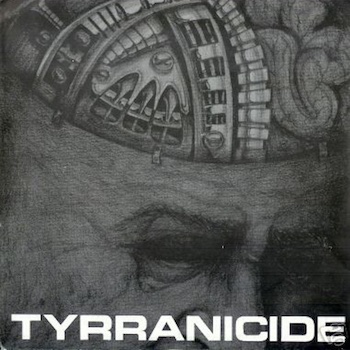 I knew these dudes from their God Save the Scene debut, of which I long thought it to be their only release until I stumbled across this single. Now, early 90's releases from crossover and/or thrash bands from the 80's can sometimes be a bit of a sad affair, having to discover that the band is trying to update the sound they were known for, but partly or even completely failing at it. That's why I'm glad to be able to tell that Tyrranicide primarily picked up where they left off before, without any contrived experiments.

There's 2 tracks on offer here. On the A side we find the peculiarly titled 'Hard like a Machine'. There's no lyric sheet, at least not with my copy, so I have no idea what it's about, but isn't a machine always hard? There are not a lot of machines with the consistency of warm butter, as far as I know. The track itself showcases the band going off with their brand of hardcore-ish metal, kinda Black Sabbath meets early Agnostic Front, with occasional stabs from Dead Kennedys and early Corrosion of Conformity thrown in. Primal groove alternates here with uptempo hardcore-ish parts, which makes for a pretty varied song.

The same can be said for the track on the flipside of the single, which is another varied offering, again fusing old school hardcore with primal metallic riffing. Of both tracks, I have to say I like this one the best, with it's hardcore punk fueled energy and crawling Black Sabbath/Saint Vitus/Black Flag ("My War" era) styled middle part. Variation is again found in abundance and with this the band know how to keep it suspenseful. This is no one-dimensional affair. Charming is the fact that the drummer does a small fuck-up in the middle of the song and they just left it in. Now that's real punk attitude, gentlemen.

The overall production on both tracks is a good part above average, which benefits the music a great deal, and the vocalist makes me think of good folk like Wargasm's Bob Mayo or Channel Zero's Franky DSVD. Perhaps not the greatest vocal delivery ever, but they complement the music well, because primal thrash/hardcore like this doesn't have a lot of use for Pavarotti style vocal acrobatics, now does it?

This is a competent effort from a band that kept running with the torch they lit, and it is a good listen for those into early 80's hardcore and the more primal thrash bands of that same era. For my personal taste, I wouldn't have minded some more emphasis on velocity, but that's only my opinion. What's left is a well-played, varied and competent EP that deserves a place in every decent thrash collection worth it's salt.