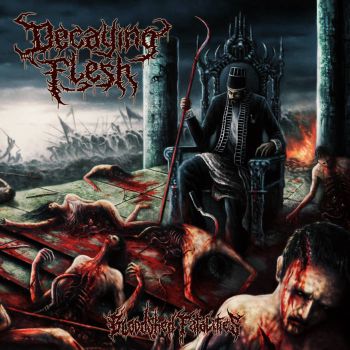 I don't know what the deal is in Indonesia, but there's a shitload of head-caving brutality spewing forth out of the country. Absolute Defiance in the past and, more recently, Cadavoracity and Perverted Dexterity come to mind, but there's a whole lot more than those mentioned in the tidal wave of BDM rushing over the scene right now. Decaying Flesh are among them, and their Bloodshed Fatalities full length is no laughing matter, even if it had me joyously going "he, he, he" at various times.

The utterly remorseless brutal death metal is totally worthy of the moniker, I'll tell you that. This is one hell of a mean brutal death metal grenade! The blasting percussion (courtesy of Roland, but don't let that deter you) hammers home the point that this is not for the faint at heart. In style they play in the same neighborhood as the acts mentioned before, but there are subtle (weird choice of words here, perhaps) influences of bands like Brodequin and Mortician to be heard as well. I fully realize that that can be said about most of the bands in this specific style, but Decaying Flesh do it with style and gusto, delivering an album that lands like a sledgehammer on the throat. The music is down tuned and heavy, and the vocals deliver exactly the guttural roars you'd expect from an outfit like this. I really appreciate the fact that the vocalist sounds very similar to the late Joe Ptacek from Broken Hope, employing a similar beastly delivery. Even if this is far from original (I think I can name about 10 other bands that sound like this without hesitation), I can certainly appreciate the utter savagery on offer here. Another plus is the fact that this cd sounds great and that the band relies more on blasting aggression than it does on slamming mid-paced sections, making this album a veritable BDM beast!

If I have to list off some of it's lesser qualities, it's only minimal gripes like the programmed drums that sound a tad artificial at times (which is par for the course with a drum machine) and also that the intermezzo 'Troops of Bangkalan' is kinda annoying. Some would add the lack of originality to this list, but I really don't care about something like that. I'd rather have a pummeling battering-ram of an album that sounds familiar (like this one!) than something boring and contrived just for the sake of being original.