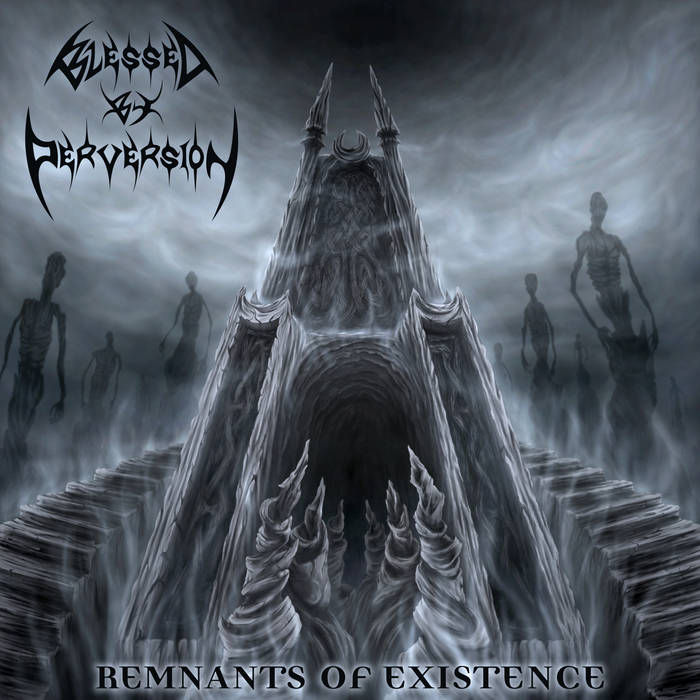 When I read the name of the Greek band Blessed By Perversion for the first time, I thought "hm, the name chosen is not so great". But I nevertheless listened to their second work Remnants Of Existence and I must say that despite the somewhat, let's say, provocative name I am positively surprised by the music.

The cover is worthy of a death metal CD, it is held in dark colors, very gloomy and apocalyptic, so the visual impression is already successful. But how is it musically? Blessed By Perversion play quite technical death metal, which is located in the mid-tempo range. When I say technical death metal, by the way, I don't mean the technical fiddling from the drawing board that some bands play, but as a reference Monstrosity came directly to my mind at the first listening, whose last album is stylistically quite similar. From the song structures as well as the vocals, which are quite deep and in places are underlaid with distorted growls. However, the band does not simply copy, but underlay their songs with quite vicious keyboard sounds, which makes the tracks quite varied and interesting. If you listen to the album more often, other influences like (due to the keyboards) Nocturnus A.D., Suffocation, Atheist or even the more technical Death albums (especially "Human") come to mind. These influences are quite clearly recognizable in songs like 'Caverns of Torture' (listen to the riff and compare it with "Souls to Deny") or also 'Within Moments' (the keyboard and the bass could also have been used so or so similar in "Human"). However, there are no songs on the album that really stand out, the compositions are all on a pretty good level. The production is as a death metal production should sound , the instruments are all produced balanced and the voice is aggressive and powerful.

Blessed By Perversion have written a very original and entertaining album, which does not copy from their influences, but skillfully combines their features into an independent work. If there are points of criticism of the album, then the playing time, which with less than half an hour in my eyes (and ears) is much too short. Perhaps a cover would have made a nice bonus candy.

Leave it to the Greeks to find what death metal is often missing! Blessed by Perversion play the genre at its catchiest, without veering into “melodic” territory; and its most atmospheric without ever sacrificing an ounce of heaviness. If that sounds like a long way of saying “please more keyboards in my death metal!” well yes that’s part of it. But the traditional metal instruments, as well as vocals and lyrics, do a great job of forging the atmosphere too.

Andreas’ vocals are very deep, reminding me of Paul Kuhr from Novembers Doom in his ability to sound at home with slower passages as well the conventional death metal pace. His tone is mostly comprehensible, which is good because the lyrics are worth it. Take this example from 'Gallery of Bones':

Instrumentally, it’s the last two songs on Remnants of Existence that best encapsulate Blessed by Perversion’s two styles. First, there’s the pummeling ferocity of 'Caverns of Torture'. Kostas and Manolis on the guitars treat us to a duel between choppy bursts of tremolo, and juddering crunches that are so heavy, they’re almost percussive. At their best, Kataklysm did that, so did Dutch greats Severe Torture. Blessed by Perversion keeps right up with those guys. Then we’re back to the haunting atmospheric side with album closer 'Within Monumental Chaos'. Song absolutely merits its title! I love how the keyboard picks up the creepy clean guitar intro, before giving way to a lumbering march of electric guitar. When done right, slow death metal can be heavier than the faster stuff; and 'Within Monumental Chaos' accomplishes that on a level at least equal to Morbid Angel’s "Blessed Are the Sick".