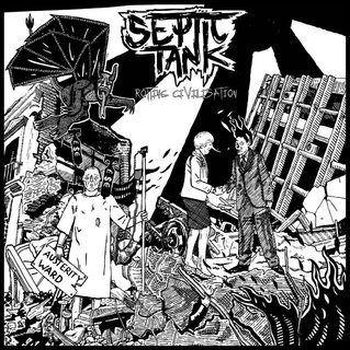 Septic Tank is a kind of supergroup with (ex) members from well established acts like Cathedral, Repulsion and Napalm Death. After releasing a quite enjoyable 7" some years ago, they finally got together to record their first full length, and let me tell you, it's a banger!

It's apparent in everything that this is a tribute to the bands that inspired these men as kids, the band's name, the artwork and of course the music. It's like taking a walk through these people's combined record collections. Personally, I'm totally sold on this album, this was without a doubt one of the best releases in 2018.

Starting with the artwork, let me be damned for all eternity if that cover is not a nod to "The Day the Country Died" by The Subhumans. Leafing through the booklet I encounter a drawing of an English copper, complete with a swastika on his helmet, slicing a punk's throat. Well, hello there, Doom's "Police Bastard''! Then there's this picture in the middle of the booklet that brings to my mind the cover of Dead Kennedys' "Bedtime for Democracy". There's probably more but I still have to find those.

The music has the same approach to it. For the main part it's old school UK hardcore punk, think of bands like Discharge, The Varukers and Heresy spliced with US acts from the same era like Septic Death, Crucifix and MDC. Don't get mistaken though, this is not a one dimensional affair. Songs like 'Divide and Conk Out' and 'You Want Some?' evoke the spirit of Tank, Warfare and Motörhead. Celtic Frost comes peeping around the corner in 'Treasurers of Disease', 'Fucked' reminds me of Unseen Terror and 'Danger Signs' makes Voïvod meet 80's USHC, Die Kreuzen style. In 'Death Vase' the guys have written their own "Tales of the Macabre", originally by Canada's Slaughter, who the band reference again in 'Living Death'. Closing track 'Rotten Empire' gives you an idea of what a jam by an early NWOBHM band and the young D.R.I. may sound like. And all of this with a raw and energetic sound that doesn't sound polished or outdated. What's not to like?

This album could appeal to a pretty wide array of loud music enthusiasts. Are you into punk/speed metal a la Whipstriker or Toxic Holocaust? Give this a go. Are you a fan of the output of Sweden's Distortion label and early crustcore? Try this one on. Punks, crusties, metalheads that like it raw and fast paced should all give this a listen. And now please excuse me, I'm going to push play again and turn it up a bit louder.