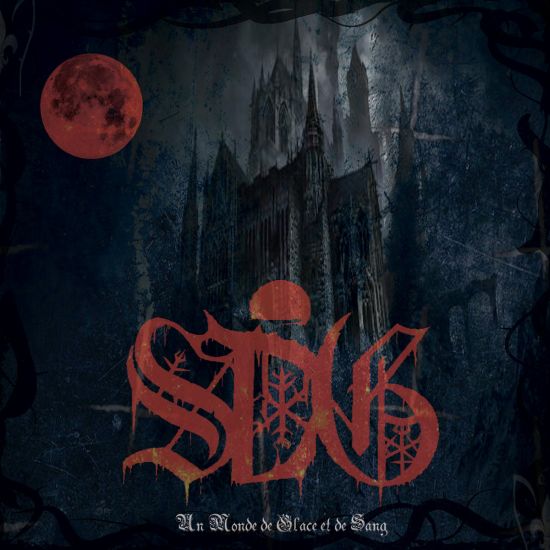 I recently ate poutine, which is something like the Canadian national dish. It's French fries with lots of different delicious things like cheese, bacon, onions and so on on top of it, which together make a wonderful dish. What does this have to do with Sorcier Des Glaces? Well, with Un Monde De Glace Et De Sang it is the same. The album consists of many different components that together make a wonderful creation. However, you should take your time to listen to this album in peace and quiet, because you will always find new subtleties. At least that's how I feel and I have listened to the album several times now and I am still surprised again and again.

But what are the components that make this album so remarkable? On the one hand, the classical, furious, melodic Canadian black metal, which you are used to from relevant bands, but on the other hand, especially from the fourth track on, you find many reminiscences of the Norwegian black metal bands, which were more or less popular in the mid-nineties. During the last listening sessions I had to think over and over again about which band this riff or vocal part reminds me of. The range goes from Emperor, Satyricon, the first two Dimmu Borgir, Borknagar up to Old Man's Child (whereby here especially the vocals remind of it). It doesn't sound like a copy and paste production, but the compositions are lovingly arranged and result in a great overall arrangement. I don't want to deny a certain way of, let's say, "recomposing" songs of the mentioned bands, but in my humble opinion this is not really bad, but exactly what an album written in the style of the nineties needs. The guitars sound jingling and icy, the drums fit perfectly, sometimes even blast beats are used and the singer nags and poisons as if he has to go straight to heaven. The album is exactly what I expect from an orthodox melodic black metal album.

The lyrics are surprisingly about death, the end of the world and other inconveniences, so that not only musically but also lyrically everything is in the green black metal range. The production is well done, but especially in the beginning the songs sound a bit hectic and choppy. But it's like a good red wine, the more time goes by the better. There are not really any special hints for the beginning, maybe the Necromantia cover "The Warlock" as well as 'L'Éternelle Majesté des Montagnes' should be mentioned, because they are a bit more diversified than the other songs. But this is not to be understood as a point of criticism, since the album is composed strongly throughout.

To sum up, Un Monde De Glace Et De Sang has become a bear-strong album, in my opinion one of the best black metal releases of the year, if not one of the last years, because it contains all the components I expect from this kind of music. The only question I have to ask myself is why I never heard of this band before the album, even though there have been several albums before.