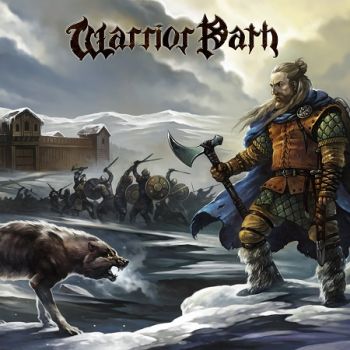 Greek heavy metal scene has always been good, with the occasional diamond shining through the rough accents and the mediocre sound productions. Warrior Path manages to overcome both of these usual Greek problems but falls behind in the most important trait of this music, the songwriting. But first things first, let’s dive into the songs and see the good before moving on to the bad and eventually the ugly.

The album begins with arguably one of the strongest tracks in it, the bombastic 'Riders of the Dragons' with a very strong, almost lawsuit worthy “Rime of the Ancient Mariner” flair that is overall quite enjoyable. Moving on to 'The Hunter', a straighter power metal effort with a very “Mirror Mirror” sounding intro that fortunately develops into another album highlight, mostly driven by Yannis’ soaring vocals. Next up 'Sinnersworld' and Iron Maiden lawyers never had an easier case in their life and finally 'Stormbringers' a mid-tempo heavy metal thunder coated by the best riffing in here, probably my favorite track in the album.

One of the biggest problems of Warrior Path’s debut is that it is severely uneven and this becomes painfully obvious from here on. 'Black Night' sounds like an 80’s Scorpions rejected ballad with God-awful lyrics and a punishing 8:18 minutes duration. 'The Path of the Warrior' is a hot mess of some very nice ideas strongly rooted in the old Manowar ways but ultimately falls victim to its lack of musical vision. 'Fight for Your Life' and 'Mighty Pirates' are the textbook definition of OK songs, easy on the ear but totally forgettable. The album ends with the baffling decision to place two back-to-back ballads -both of which are too long for their own good- that diminish the whole experience to a chore rather than ending the album on a high note.

The songwriting is “lacking” with most songs overstaying their welcome and along with the weird placement make the album devoid of any long-lasting impact. There is a decent amount of acoustic passages that work well at times, adding to the overall atmosphere, but as soon as you think the band found its own sound and is taking a step forward, another misplaced riff (or an entire song) takes two steps back.

Yannis Papadopoulos’ performance is good, proving he is one of the better voices of our time, but at times it feels he was underutilized as we never hear him going the extra mile. His work might have been hindered by the mostly bland vocal lines and the horrible lyrics he had to sing which is a huge issue that progressively becomes more cringe inducing as the album unfolds.

The mixing is crystal clear and Bob Katsionis has done a decent job on this album, the guitars are shiny and very well executed, while the bass is punchy and audible throughout. The overall sound is a tad too digital, perhaps due to the obviously programmed drums but it never is too distracting and works well within the context of the overall effort.

The main problem with Warrior Path is that the whole project sounded much better on paper. The promise was a mixture of early Manowar, Riot and Iron Maiden with a veteran of the power metal scene joining forces with one of the hottest voices today, so the expectations were sky-high. What we got instead was a very uneven, forgettable album that ventures too often into plagiarism and struggles to find its own identity.

Worthy tracks to check: 'Stormbringers', 'Riders of the Dragons', 'The Hunter'