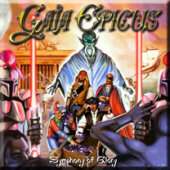 Do you hate when a trend gets too overdone. Time after time everyone seems to sound like everyone else in the world. I hate that the most, even when there is no plagiarism going on. It just seems like a cheap way to go sounding like someone who has actually worked to get the sound through hard work and creativity.

Sounding like a Frankensteining of Dragonforce, Trivium and Yngwie Malmsteen on too much espresso. Norwegian Prog-Metallers Gaia Epicus sound exactly like these three bands all rolled up into one. Which is not even suppose to be a compliment. With a lack of any sense of originality to the music and way over the top production that sucks what little soul the music had, the whole CD just falls flat.

It is really horrible when a band cannot or will not try to do something original due to either a lack of ambition or just outright arrogance. Sad thing is that bands make money doing this all the time, but the true metallers will see right through it and not listen. Gaia Epicus is one that will be overlooked... and for all the right reasons.