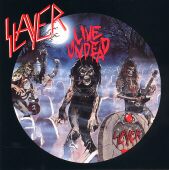 One of the things I've been doing lately is collecting full discographies of bands I really, really enjoy. Of course, one has to draw the line somewhere, so I stick with just LPs and EPs. Stuff like live albums or splits or videos/DVDs are optional little extra content purely for beefing up the collection. I've been able to realize the completion of several bands over the years like Metallica, Disturbed, Superjoint Ritual, and Volbeat, just to name a few. Some bands I'm sickeningly close to finishing but, are incomplete because of one EP or album that is forever elusive for one reason or another (e.g., out of print, hard to find, import only, etc.). With the purchase of Reign In Blood earlier this week, Slayer's discography is now officially complete for me. However, in the case of the almighty Slayer, their first live album here had to be included for the sake of completion.

With a lot of these albums from the past by these legacy bands, I'm a stranger to. My being only 29 doesn't lend much credibility when I'm asked about the reverential status these albums have because likely, I'm only familiar with them by it being passed around peripherally in conversation by other metalheads. Don't worry, everybody, I'm updating and spit shining my metal card with every album successively compiled onto my ever-expanding library. This album, even though it's considered to be a live recording, I feel it has to be included as canon in the discography as something of a "must have" given how early it was in the band's career and it being officially released by Metal Blade. So, there's the justification. Now onto the music.

Of course, being this was released in '84, the same year as the Haunting The Chapel EP (the EP came out first), the original four horseman are here: King, Araya, Lombardo, and Hanneman. There's absolutely no denying the unparalleled level of energy on display. They're all in their 20s. They're rapacious and hungry for blood. They were on the cusp of becoming a force to be reckoned with but, that would have to wait with the following two masterpieces of Hell Awaits and Reign In Blood. They're all in top form. I don't need to explain just how phenomenal this sounds; how masterful the playing is. This is Slayer in their absolute prime. Nothing can top the ferocity that's felt when you hear Tom Araya hitting those piercing falsettos or when he gives that fucking amazing delivery before 'Die By The Sword' starts, neither can you deny the tight chemistry between Hanneman and King as they trade solos back and forth, and the tight tight TIGHT double bass groove that Lombardo belts out on 'Captor Of Sin' is undeniable in how amazing it is. Classic songs from the EP and debut all played with the tightness, skill, and no-holds-barred energy you'd expect from this band in the mid-80s.

Now onto the big elephant in the room. It's not a true live album. Well, that's debatable. I'm not sure exactly what set of circumstances led to the band to go the approach they did but, from what I read, it wasn't good. Something went horribly wrong along the way and, thus, enter the studio crowd. There’re clearly real Slayer devotees involved in the booth and, obviously, there's fury and passion for the band's music. In fairness to the producers who orchestrated this, I'm preferable to this method as opposed to a fake canned crowd pulled from a soundboard. Still, though, I cannot escape the fact that's a real crowd in a sound studio that feels as if it was added in post-production. For me, it almost ruined the whole experience. Thankfully the music was so amazing, it was a pleasant enough distraction from the fact the was an artificially inserted crowd, albeit composed of real people. That's about all. I don't know what else to say that hasn't been said already. It's a live Slayer album released alongside the pantheon of their first three albums and their EP released in the 80s.