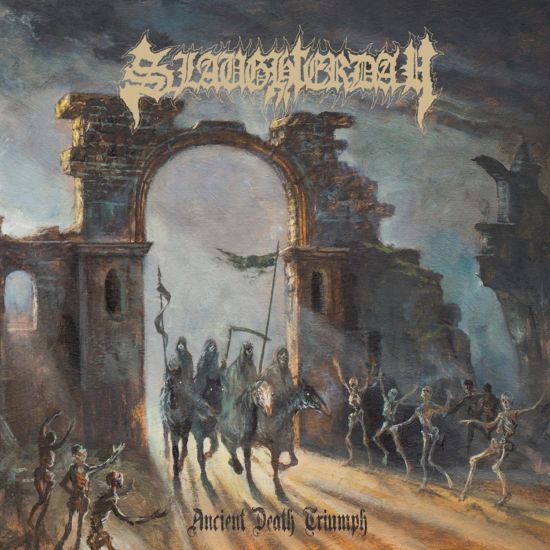 Slaughterday from the lovely German North Sea coast are back and send their third full-length towards mankind. It took them more than four years to write their Laws of the Occult follow up, quite a long time and maybe they used the long time for some stylistic changes?

Let's start with the cover. The last ones were dark, desperate and apocalyptic, this one is, well, almost colorful and apocalyptic, but it also shows some hope for redemption. However, the picture appears not only apocalyptic, but also hopeless in a certain way. You can see the four horsemen who are entering a city (of the damned?), while the dead are dancing on the streets. Maybe the cover shows us a hint into which direction the music will go? Will it be hopeless, desperate or maybe redeeming? The album itself consists of 9 tracks including an intro and a cover song by Anvil. The total running time takes about 41 minutes, I guess this is an adequate time span for a death metal album. The album is, like their other albums were, released by F.D.A. Records, a label which death metal maniacs should know for sure. So far, so good, now let's talk about the music.

The intro isn't too long and it holds no keyboards or any other experiments, but somehow it reminds me of the last Carcass output. After the intro the first song starts with a sound from the deepest muddy waters of the North Sea which motivates the water corpses to rise from their sea graves ('Ancient Death Triumph'). It is very old-school and sounds like a mixture of Autopsy, old Death and Finnish-influenced death metal. The tempo changes from very fast to almost funeral doom and when Bernd Reiners is performing his vocals, you can nearly feel the morbidity of the track. The next tracks are composed in the same way, whereby the guitar solos often have some similarities to new Carcass recordings, not in this happy style, but more to underline the morbidity and hopelessness of this record. The vocals remind very much of Autopsy, really sick and perfectly matching the songs. 'Malformed Assimilation' starts with a great groovy riff and it sometimes has an almost punk-like atmosphere, a cool catchy song. 'Discarnate Forces' begins with an in-memory-of-Death part which reminds me of “Evil Dead”, but after this it's also kept in the style I described in the beginning with a very catchy instrumental part in the midst of the track. The cover 'Thumb Hang' is a very cool interpretation of the original, of course kept in a death metal style. I was never a huge fan of Anvil, but I do really like this version. Maybe it is remarkable that Anvil bassist Chris Robertson himself played the bass on the track. All the songs don't show any sort of kindness or happiness. Instead they implement the feeling that you should better leave your home, go to the sea and join the water corpses in their wet graves. It could be a good soundtrack for “The Fog”.

The production of Ancient Death Triumph is very good. All the instruments are very well-balanced, so there is no complaint about it. It was produced by Jörg Uken, whom the one or the other could know as the drummer from the German band “Temple of Dread”, who also released a great album this year or maybe from his productions for “Obscenity”, “Fearer” or “God Dethroned”.

So, if you like old-school death metal played in a very solid way and you don't like any experiments or stylistic changes, this record is highly recommended for you. If you prefer some melodic or happy death metal, better keep your hands off this one! It is the perfect album for the dead to party on the streets when the apocalypse is approaching.