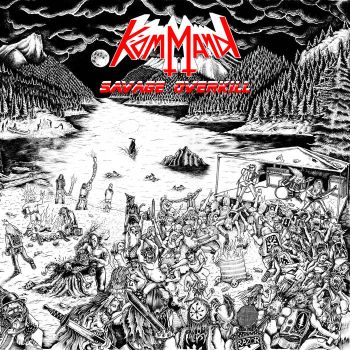 Do you remember At War? Their music was raw, simple and violent, it came directly to the point and this no frills approach left its mark, at least on their first two albums. Music aesthetes did not have fun with this trio, but the filthy rest appreciated this bastard of Exodus, Venom and Motörhead. Kömmand from the United States sometimes appear as At War 2.0 and the Lemmy-like “ö” in their name is no coincidence too. Vulgar and mean, direct and straight, this is the way their second album sounds. Aptly titled, Savage Overkill does not take care of any kind of beauty. The slightly inhumane nagging and shouting of the lead singer does not lack currishness. He spreads the aura of a beast of prey looking for flesh. Due to a certain degree of charisma, he shows a good performance which fits the musical approach; and this approach is also dominated by him, because he also is responsible for the guitar work. The rhythm section commutes between mid- and up-tempo. The band does not intend to reach the highest level of velocity, but there is also absolutely no reason to fear slack sequences.

Although the songs (minus the intro) have an average length of nearly five minutes, they do not suffer from unnecessary complexity. Kömmand keeps an eye on easily accessible song structures without neglecting the inherent brutality of their music. Unfortunately, they do not score with immediately fascinating tracks, but their material has enough substance to form a resilient black thrash metal album whose guitar work holds trace elements of early Celtic Frost as well. And from time to time, they surprise the listener, for example at the beginning of 'Northwest Thunderfloots'. The song starts with some heroic “ohoho” shouts and turns out to a mid-paced demon with well-hung riffing. This song pays more than the remaining material tribute to the Swiss legend. It hails tracks such as '(Beyond the) North Winds' and therefore it belongs to the highlights here. By the way, is it really true that “To Mega Therion” celebrates its 35th anniversary this year? It’s incredible.

Too bad that Savage Overkill does not reach the quality of this classic. Even after the fifth round, two or three of the speedy tunes rush by without being able to develop an own identity. This does not mean that the adequately produced album suffers from major flaws. Yet it seems as if the nasty trio ran out of ideas during the song-writing process. This shortcoming prevents a better rating and I don’t think that other people than convinced black thrash maniacs should check out this work. But the latter group is well advised to lend an ear occasionally. Kömmand will not revolutionize the bastard genre, but exactly this is likeable. Since its beginning, black thrash has always been a shabby form of art that needs absolutely no readjustments. The powerful closer of 'Savage Overkill', a distant relative of Exodus’ “Strike of the Beast”, provides the ultimate proof in this context and brings the album (after two pretty faceless numbers on the seventh and eighth position) to a positive end.