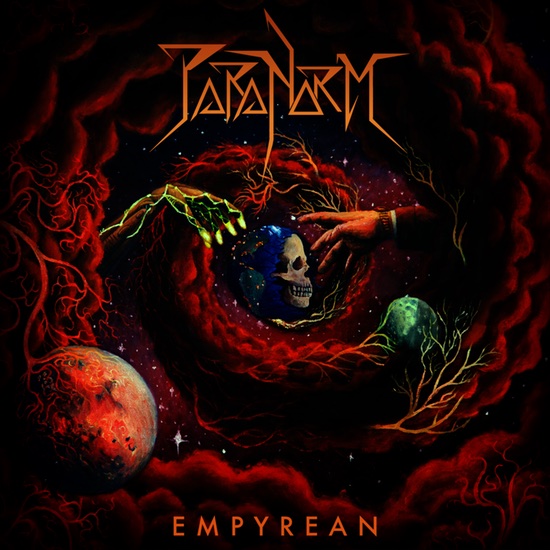 One thing that has bummed me out about the whole “death metal revival” trend is how it seems to sideline some good thrash metal. To clarify, though, thrash bands aren’t starving, nor is this a case where the current trend killed off another. There are many new and promising thrash bands, as well as some established acts, but they don't have nearly as much hype as death metal bands like Frozen Soul. And on today’s menu there’s a technical thrash metal band out of Sweden with their debut full length Empyrean, to be released through Redefining Darkness Records.

Paranorm has been around for a hot minute but have only now gotten around to drop their debut album after a demo and two EP’s. In short Paranorm play technical thrash metal, aka prog thrash, with a sci-fi angle in their lyrics and overall image (which seems to be a popular aesthetic in prog thrash), no doubt the influence of this style’s forefathers Voivod. And Paranorm do show that influence, from the get go. You'll get assaulted with speedy riffs and double bass drums, but where Paranorm carve their own path is primarily with their vocals and what can only be described as a Swedish touch in their music. Front man and guitarist Markus Hiltunen’s raspy shrieks and grunts give the album something of a death metal edge, and the same can be said for the music. The band displays a very Swedish melodicism and even lean into the more hardcore punk roots of thrash to create a bombastic thrash metal sound which is further embellished with more progressive elements (like the focused speed and sections of pure guitar virtuosity a'la Yngwie Malmsteen), and what’s more impressive is how the band keep a consistent quality of music and performance from beginning to end and without the need of any fillers or interludes.

Paranorm show that they don’t really need to mess around with interludes as the longest songs do an excellent job with instrumental passages where the band brings some acoustic guitars to set that epic sci-fi atmosphere, and again, the melodicism the band displays is so uniquely Swedish. Unlike other prog thrash out there, Paranorm (one might even think that the band in the span of time between being formed in 2008 and now), were able to hone their musicianship to such degree that the album might sound like the work of much older dudes. The level of technical skill and finesse is downright impressive and all that skill the band has is backed by their truly outstanding songs. There’s a catchiness that hooks you from the beginning and then you just let 50 minutes go by. That's is the mark of a great band. They made a very long album with very long songs but you just get lost in it.

Overall Paranorm have accomplished something truly special and distinctly theirs, even if there won’t be a new trend of prog thrash any time soon, Paranorm have the chops and hooks to make it go forth and make it big.