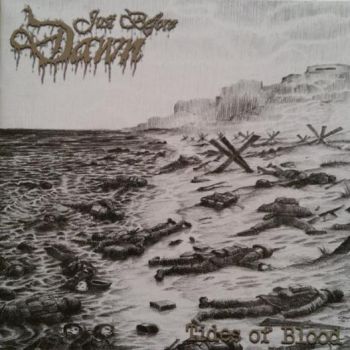 Bold statement: Experienced metal freaks can identify the inspiration source of a band without having listened to a single tone of it. You don't believe me? Okay, let's make a kind of quiz. I say "Honour. Valour". You say? "Pride". I speak of "Those once..." and you scream "Loyal". So now give me the role model of Just Before Dawn: "Bolt Thrower!" Yes, I knew it. My risky thesis is correct and you are an honourable metalhead. This is your applause! (Clap, clap, clap.)

Don't get me wrong. Just Before Dawn from this fantastic country called Sweden are no copycats who have created a slavish imitation without any good ideas. They manage the legacy of the British battleship worthily. This means they deliver all the emotions that characterize so many albums of their fallen heroes as well. Tides of Blood evokes - in no particular order - majestic, desperate, tragic, apocalyptic, sublime, wistful, demoralizing and fatalistic emotions (with no claim to completeness). Nevertheless, it also sounds fresh, lively and energizing. I am therefore sure that its creators did not intend to make a Bolt Thrower tribute but the best album they were able to record. And - surprise, surprise after you have seen my evaluation - I am convinced that this is a very strong work which has all aces up its sleeve in order to enthuse many death metal maniacs (and additionally even dudes like me who always saw death metal in the second row behind thrash and black metal.)

Despite the obvious influence from the United Kingdom, I would not say that the material suffers from predictability. Of course, the general formula does not score with originality. Yet only fools complain about this fact. Everybody else will agree that it is exciting to experience how this band makes good use of its room for manoeuvre. The mega-heavy riffs and impenetrable leads generate the wall of sound that seems to be the musical embodiment of a tank attack on a broad front. These divisions rely on the latest equipment and their destructive force makes careless listeners shiver. Moreover, the songs can be blamed for uniformity. Yes, they stand shoulder to shoulder like soldiers that feel the need to experience the comradeship of their fellow sufferers for the last time. But exactly like these (seemingly unknown) soldiers, the songs have their own unique personality - you just need a close look, or, more precisely, an undisturbed listening session. Better still, the fact that all pieces are cut from the same cloth has an interesting effect. "Tides of Blood" belongs to these outputs where the whole is more than the sum of its part. The monolithic architecture of the full-length forms a real monument.

Another detail makes the comparison with Bolt Thrower inevitable. Just Before Dawn present various vocalists on Tides of Blood, but Dave Ingram, the grand leveller, holds the lion's share. As you probably know, he has been responsible for the vocals on "Honour - Valour - Pride'' as well. He becomes better and better - or is this just the modern recording technique that makes him sound so fantastic? Or a combination of both? Either way, this well-versed war correspondent performs in an overwhelming manner. His voice has this demonic and atrocious touch that completes the picture. It is not easy to withstand the massive, extremely dense and powerful noise of the instrumentalists. An ear splitting inferno breaks loose as soon as 'Day of Days' sets in. The first regular track after the relatively senseless intro is an absolutely deadly weapon, but, good news, the here reviewed work does not belong to those albums which should have been a single. This opener is no trap, but it defines the direction of the full-length. Further tracks achieve a splendid level, for example 'Battle for the Bridge', the title track, 'Civilian Alliance' or 'Spirit of the Blitz'. Never before have melancholy and brutality been so close to each other.

Whenever the double bass drum drives the songs forward, I am listening to a feast of heaviness and devastation. These are the parts when the tanks are rolling and firing, while the doleful sections deliver the soundtrack for a fallen comrade's funeral at dawn (or "just before dawn", who knows?) Although a song title like 'Bombs over Bremen' (another musically outstanding piece) makes my German heart bleed, I must say that I am really impressed by this gargantuan full-length. Just Before Dawn has the potential to become a force to be reckoned with. Their fighting spirit is enormous. Hopefully, some more outputs document that their battle is raging on and on.