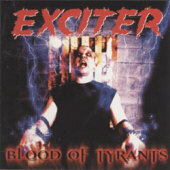 Blood Of Tyrants was the second (and last) regular album of the Canadian speed metal pioneers with lead vocalist Jacques Belanger. With a view to his strong performance on The Dark Command, this was a pity. This was furthermore due to the fact that he also made a mighty delivery on the here presented album. But the whole band carried on exactly there where their last full-length had stopped. Exciter delivered once again a harsh and pure speed / thrash metal attack without looking left or right. And that is (almost) all there is to say about Blood Of Tyrants which appeared as the younger brother of its predecessor.

With regard to the musical continuity of the band, it came as no surprise that the line-up remained unchanged since the release of The Dark Command. Mastermind John Ricci had written new riffs that built the stable foundation of the belligerent tracks. As usual, these riffs did not shine with exceptional complexity. Nevertheless, they worked. This was noteworthy because the producer was obviously of the opinion that the importance of a powerful guitar sound is overvalued. In any case, the guitars lacked of pressure up to a certain degree. But let me come back to the riffs. Just one thing annoyed me. It was more than embarrassing that the first and the seventh track offered exactly the same riff at the beginning. Why didn't the band recognize this duplicitiy? But apart from that, the guitar work was in close proximity to that of Violence & Force. Slightly more progressive tracks such as 'Blackwitch' from their debut or 'Born To Die' from the masterpiece Long Live The Loud did not play a significant role. The instrumental ('War Cry') with its elegiac approach was probably meant to loosen up the speed assault. Unfortunately, due to its leisurely pace and the missing screams of Belanger, it rather seemed to be some kind of foreign body.

It was more fun to listen to the simple and straightforward up-tempo tracks. Although the songwriting did not offer any signs of refinement, Exciter showed up with some stirring samples of their art. 'Rule With An Iron Fist', for instance, distinguished itself through its continuous intensity and the incredible shrieks of Belanger during the bridge. The final piece called 'Violator' achieved the same level of heaviness, energy and vehemence. More generally, the choruses did not lack of catchiness, not at least because of the accurate background vocals. The compactness of the songs remained remarkably consistent and the rigorous adherence to the no-frills songwriting concept constituted an other outstanding feature of the album. Its weakest spot was the imbecile cover. Low budget or no budget? However, no correlation was recognisable between the title of the full-length and its "artwork". So what? Exciter had created a strong album and they stayed true to themselves. In those circumstances, the remaining heavy metal maniacs had no reason to grumble. - Epilogue: as you have surely noticed, the original band members Beehler, Johnson and Ricci have decided to reunite after almost thirty years. I hope that they do not release a new studio album for the sake of itself. It should be at least able to reach the quality level of the here presented output. Good luck, guys, long live the loud!