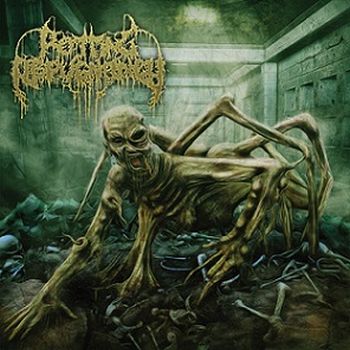 When I think of the UK, I usually think of shit weather, food that looks as if it's been eaten before and beer that's stale from the moment it left the brewery, but not death metal. Still, every now and then there comes a band out of the country that manages to pique my interest, like this here Rotting Repugnancy.

On this release, the band still was a duo, and from the sound of it they operated from out of one of the members' bedroom, or kitchen, or toilet, or any other room from the house really, because the production has that real "homemade" feel to it. The overall production sounds kinda muffled, like it was recorded inside a closet stuffed with blankets, with a pretty boxy sounding drum machine to hold it all together. This is far from a stellar production job, but it does not annoy me, to be honest. This kind of DIY approach to sound engineering can sound charming in the hands of a capable band, and capable these blokes are! Even if their approach to brutal death metal is far from original, I still get a lot of enjoyment from this release.

Their sound as a whole made me think of bands like Viral Load and the early works of bands like Putrid Pile or a less technical Dying Fetus, being well-played brutal death metal without any unnecessary frills. This sound is poured into compact songs that have you nodding your head and stomping your feet in no time, checking all the boxes for those into brutal death metal, with touches of old school death thrown in. Perhaps it's the knowledge that Rotting Repugnancy is from the UK, but I swear that throughout I heard the influence of older acts from that country, think Benediction, Cancer or Desecrator. The band even channels Morbid Angel in the fittingly titled 'Domination of Darkness', and in the riffing I occasionally hear the influence of Slayer popping up, neatly combining old school and new school in a highly enjoyable metal meltdown here! The runtime of half an hour makes sure this cd does not overstay its welcome, and that it is over before the cheap production values start to get annoying, of which I have to say: well played, gentlemen!

On their follow-up album, Rotting Repugnancy have changed into a full band with a real drummer, upping the recording values as well. Unfortunately they also saw a bit of a stylistic shift, moving away from the primitive brutal death approach and more into the direction of a band like Jungle Rot. Not bad either, of course, but I prefer this album a lot more actually.