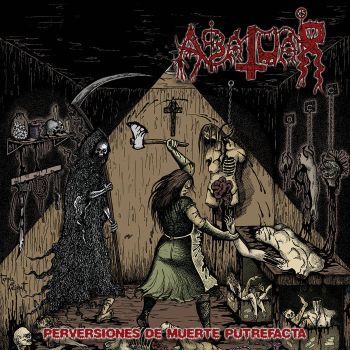 This album is a virtual stroll through extreme metal's shady back alleys. Those regions where lesser mortals do not dare to tread and glossy record executives don't want to get their clothes dirty. Where posers get dissected, just for shits and giggles and mainstream appeal is bludgeoned to death. Here, uttering the names of Lamb of God or Five Finger Death Punch will have you eviscerated without mercy.

One man death/black/grind brigade Abatuar take the primitive approach to the style. Simple but highly effective riffing and demented leads fuse together with the charging battery and gargling vocals in short and highly volatile songs, showcasing all the sensitivity of a nailgun being emptied in the rectum. Don't get mistaken though, this is not a one-dimensional affair. Abatuar know when to take the foot of the accelerator to allow some variation. Take the mid tempo riff in 'Decapitación Letrinal' that brings to mind Carcass "Reek of Putrefaction", allowing the listener to take a whiff of (stinking) breath before launching into utter insanity again. The music has me thinking of acts as Blasphemy (or Proclamation, Black Witchery, Canada's Antichrist, ... you get the picture), Nuclear Death, Archgoat, Repulsion, early General Surgery and even the first Brujeria releases, and is delivered with loads of punkish energy. The vocals that go with this whirlwind of depravity hark back to the first Sarcofago and Sextrash releases, setting the right atmosphere of abhorrence that this type of primitive metal is supposed to invoke. This sonic maelstrom of malice is poured into a fitting production, raw and unpolished, without losing it's venomous bite. This is total old school underground worship. Song titles like 'Sacramento Antropofágico' and 'En La Necrópolis Del Totalitarismo' set the right atmosphere and complete this picture of rotten primitivism.

Everyone into filth encrusted old school death/black/grind should give this a spin. It's got the sound, the energy and the spirit of those long passed times. Total respect!