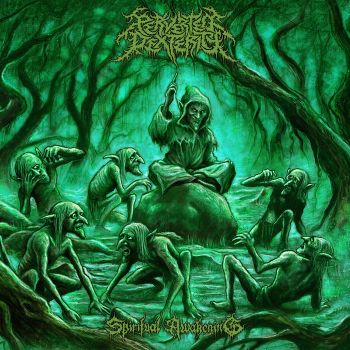 From Indonesia comes this here Perverted Dexterity with it's second full length album and goddamn, what a raging piece of sonic violence this is. There's gotta be a legion of brutal death metal bands who just packed it in after hearing this, because it's going to take a special someone to top this.

After a short spoken intro Perverted Dexterity charge out of the gates with all the subtlety of a bazooka blast to the nuts. Straight from the get-go it's blasts, down tuned guitars and gutturals that just beat you to a bloody fucking pulp. To give you an idea, try to imagine Putrid Pile's Shaun LaCanne starting a Brodequin tribute band. Most of the material goes full speed, upping the aggression factor up to eleven and even when main man Ryo slows it down, there still remains an atmosphere of utter menace about the music. The mix and production are excellent and come roaring out of the speakers, the aural equivalent of a sledgehammer to the cranium. I don't know if these are real or programmed drums, but either way, nice job playing/programming them, I've sure heard lesser performances than this. This is one solid piece of brutal death metal concrete that no fanatic should be missing out on.

Of course, the thing with this sort of unrelenting savagery is that it can get blunted by it's own approach, but Perverted Dexterity circumvents this obstacle by keeping it all under 30 minutes. It's a short, violent and abrasive shock to the system, well executed and sure to satisfy fans of Brodequin, Goretrade and perhaps even those of Canada's Revenge.

Let me put it like this: if you hate your neighbours, shove your speakers against the wall, put this cd on and turn the volume up to level "nuclear war" and let it blast! On second thought, perhaps better not, it could level the whole street. It's just that massive.