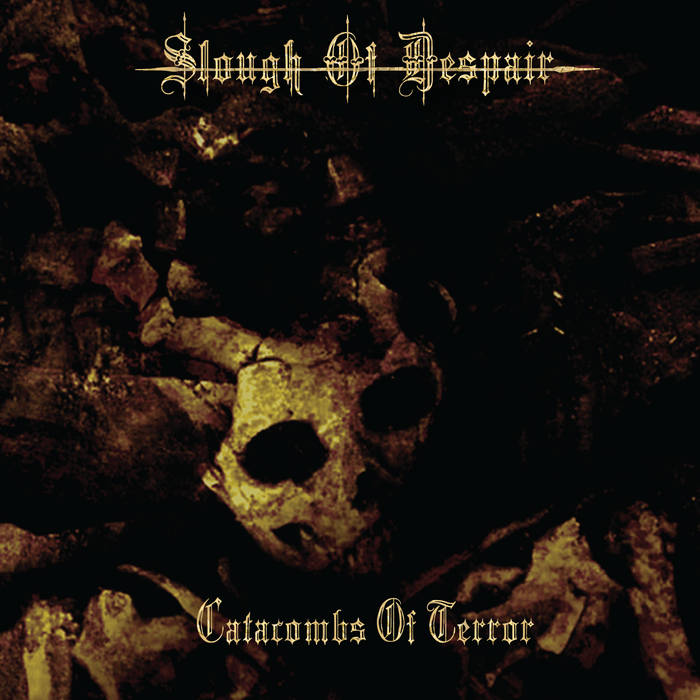 Drooling for more, as though this is the first time ever hearing death/doom metal. This band going by the name Slough of Despair may have read my mind. This is what death/doom really sounds like whenever I hear the term. Riffs with jagged teeth, dragging you slowly on the mildew, cold, hard concrete. Catacombs of Terror is like that horror movie you can't stop going back to regardless of how many times you've seen it. The movie here, the way I perceive it is existence and the unsound elements challenging each breath.

It's hard to believe there was barely any coverage of the album given how excellent the music is as a result of its direct and meticulous crafting. The production is impeccable, and is exploited by outstanding synth and melodic guitar sections as heard on 'Burial of Sanity' and 'Humanity's Crucifixion', yet within the clean sound resids a rather hideous and vile attitude compliments of the nasty rasps of the vocalist who has a somewhat similar style to those heard in Vastum. This ongoing battle between beauty and beast is what makes this album special and keeps you nodding away to a swift descent into slumber.

The guitar work is just fabulous, hence 'Shattered Reality' and 'Cursed Fate' magnify the effect of what Slough of Despair do on Catacombs of Terror. Perhaps my favorite characteristic of the album, but only by a slim margin given all other aspects trail closely behind. The drumming has its moments too given the beefy thump, oftentimes aided by the spacy and eerie guitar work. They sort of broaden the atmosphere especially when the power chords are synchronised with certain snare and cymbal sections.

The song titles give you an idea as to what is being addressed, yet it's the way the band goes about it that gives you the feeling of watching something actively regress into a state of total negativity. It's just incredible this album, and coming from Greece, I'm not surprised given it's the place I've discovered some of metal's best kept secrets.

To be released on CD through Chaos Records and Personal Records, February 26th 2021.