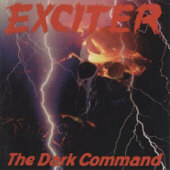 The once glorious speed metal pioneers Exciter returned with this record after a break of five years. To be more specific, the only guy that showed up again was guitarist John Ricci. His longtime companion Dan Beehler had left the band so that the line-up of this album had no personnel overlap with the grueome downers of Exciter´s discography, "Unveiling the Wicked" and "Exciter/O.T.T.". Apart from that remarkable line-up change, the powerful sound was the first thing that caught my attention. With regard to the Canadians, this appropriate production was no matter of course. Let me just remind you of the thin guitars of "Kill after Kill", the predecessor of "The Dark Command". However, Ricci and his newly formed team surprised with an intensive and dense sound. It did not lack of heaviness and pressure. Even better, it was exactly the sound that fitted very well to the promising title of the record.

The first half of the stormy full-length delivered fantastic songs without exception. Lightyears away from each and every tune of the last three outputs, the songs showed everything you could wish for. An unrest and almost omnipresent double bass drum set the pace while the efficient guitar work originated unmistakably from John Ricci. Simple but catchy riffs in the "exciting" tradition of outstanding tracks such as "I am the Beast" and "Feel the Knife". Jacques Belanger, the new lead vocalist, offered a lot of high-pitched screams so that his voice could be easily compared with that of Beehler. Quite apart from this similarity, Belanger performed in an excellent manner. Due to his passionate dedication, he left a huge impact on the song material because of his powerful yet slightly melodic approach. Admittedly, a vocalist who favours the high frequencies without exception, can be really stressful. But in case of the noisy bald head, it was just the opposite. This was a key factor for the success of "The Dark Command".

Let me come back to the first five pieces. They followed more or less the same song writing pattern. But due to their different speeds, they left no room for boredom. The breath-taking neckbreaker "Assassins in Rage" contrasted perfectly with the slow and merciless "Ritual Death", a real steamroller. As a result, the first half of the album was a pure demonstration of the band´s rediscovered strength. The tunes of the second half were less impressive without revealing serious weaknesses. It might just be a matter of personal taste, but songs such as "Sacred War" cannot compete with its predecessors. However, the band delivered a furious conclusion due to the intensity of the up-paced final track. Below the line, you will find five or more candidates for your personnel Exciter mix-tape.

To sum up, "The Dark Command" marked a mighty comeback. The band did not experiment with keyboards, acoustic guitars, clean vocals or anything else. The guys concentrated on their core competencies and this was the right decision. Everybody who is interested in their work should be familiar with this record. In other words, we knew that they had a glorious past. This album proved that they could also face the future optimistically.