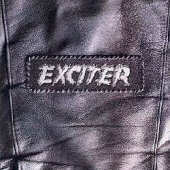 Against all fears, the catastrophic "Unveiling the Wicked" did not cause permanent damage. It shocked the "heavy metal maniacs", but from now on it could only get better. For this reason, the remaining Exciter supporters looked towards the future (and in particular the next album) with hope. Well, hope dies last - but it dies. Exciter stagnated. They were still unable to offer inspired compositions and did not know which way to turn. While playing an undefinable mix of melodic power, speed, and heavy metal, they did not recognize that they ended up in a dead end. The music totally lacked of unique ideas. We had heard songs like those of "Exciter" a thousand times. Flabby riffing, mid-tempo, verse/chorus/verse etc., dull solos. The old rule was valid: those who do not offer anything new have to compensate this lack of originality with a brilliant performance. A lot of bands release good albums without being inventive.

With regard to Exciter, nothing could be further from the truth. Well, two songs ("Scream Bloody Murder" and "Behind Enemy Lines") achieved a fairly satisfactory level. It would be an exaggeration to say that they sounded good, but they were more or less lively. That alone was enough to leave behind the other pieces. I know, this sounds a little odd. Nevertheless, all the other songs had a stale taste. In my opinion, they were not worth to be published under the band´s once famous name. To be specific, they should never had been published, no matter by whom. "Unveiling the Wicked" made me upset, but this full-length left me absolutely cold. The music could not release emotion so that this album was absolutely unnecessary. Also with a view to the new lead vocalist, "unnecessary" was the only appropriate word. While singing totally insignificant lyrics, Rob Malnati sounded more or less exactly like Beehler. Just listen to his high-pitched screams, the most striking feature of his expressionless vocals. But that was not all: according to the pictures on the back cover, he also visited the same hairdresser.

The lethargic songs would have needed a massive wall of sound, but the production must be described as ordinary. The low-budget cover and the minimalistic booklet blended in the overall picture. While other musicians work with the highest attention to release an outstanding self-titled album that is worth to wear the band´s name, these confused Canadians published a collection of second class songs that damaged their reputation massively. Sad but true, this output was only slightly better than its predecessor.