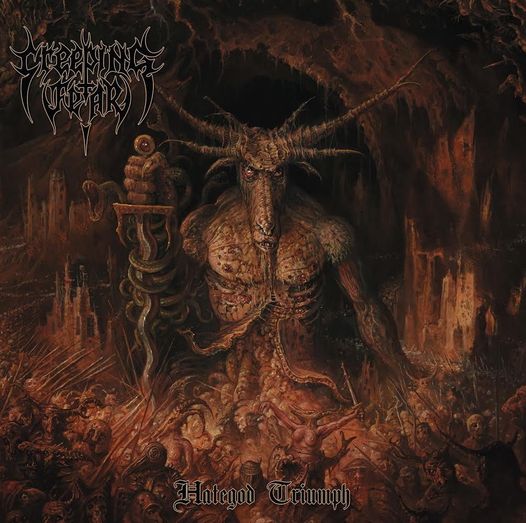 When it comes to this sub-style of entropic, speedy and tremolo-heavy death metal (which I will henceforth be referring to colloquially as “Blast Death”), it’s often the little things that move a band from “I like the idea but never actually listen to them” to “this rules and I listen to it regularly”. The template of constant blast beats, riffs that equally draw from more abrasive, atonal sides of death metal and with a bit of first-wave black metal sprinkled in, and a steady and unwavering vocal tone is a rigid and thoroughly established one, so once an artist has identified themselves as being within that paradigm (as Creeping Fear has done by recommended their new album for fans of the two quintessential Blast Death bands, Hate Eternal and Angelcorpse), they’re pigeonholed into a very specific formula that they can’t do much else with, lest they label their sound improperly.

Creeping Fear knew this, though, and moreover they had already established their sound with the full-length before this one, Onward to Apocalypse, which they ensured fell right into all the Blast Death guidelines, so all that was left to do was refine what was already there. As a result, the improvements made on Hategod Triumph have to do more with the nuts and bolts behind the scenes - the clarity of the production, balancing the mix, composing the songs with more efficiency and less tangents - as opposed to any surface changes or integration of new riff techniques. To sum it up in a sentence, they ramped up the professionalism in their delivery, highlighted by artwork by the omnipresent Paolo Girardi (known for his album covers for bands such as Power Trip, Artificial Brain and Chthe’ilist among many others). It’s surprising that such a minor polishing job and little to no other changes to Creeping Fear’s music would make such a difference, but Hategod Triumph has a much easier time snapping me to attention than the first album did, despite the song ideas being essentially identical.

90% of the reason for that is because of the vocals. Clément Ducouret has an incredibly natural harsh tone that sounds like a younger and more feral Martin van Drunen, and anyone who knows that name knows his style is not easy to replicate. That raw, shotgun screech is present in Ducouret’s voice in full force and it can turn a generic riff into an earworm. As a vocalist myself, it makes me incredibly envious that this guy just sounds like this automatically when I could practice trying to get that tone for years and not come anywhere close. It was too loud on Onward to Apocalypse, bringing forth too much of the strain and phlegm in the voice, but on this new full-length it’s dialed back enough that it still gives you that prickly feeling while also trimming off the extra breathy vestiges. The kicker is that Ducouret is also the guitarist and composer, ripping mad Blast Death tremolo riffs the whole time he’s letting out his blood-curdling screech. As if I needed another reason to be jealous!

With careful modifications to their foundation, more well-rounded songwriting and creating the right environment to showcase Ducouret’s unreal vocal tone, Creeping Fear turned a good album into a great one. If you like Hate Eternal, Cannibal Corpse and Immolation, this should be up your alley - and even if you don’t normally listen to that stuff, you need to hear these vocals.