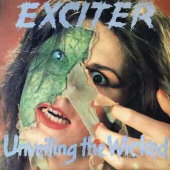 ...the harder they fall. Exciter fell into a bottomless abyss due to the release of this album. It remains a mystery to me why they changed their formula for success. Well, John Ricci had left the band, but this alone could not be the deciding factor. The band followed a new concept. “How do I become a rockstar?” was apparently its headline. The small printed subtitle was “Betray your fans and hope that they do not notice it”. But they did. It was not difficult to recognize.

The album was bleeding from numerous wounds. The production did not convince, mainly because of the inoffensive guitar sound. The powerless riffing killed tracks like the opener or "Die in the Night". The new guitarist treated his instrument with the utmost caution. Perhaps he thought that he could hurt somebody while playing the guitar in a more aggressive way. Furthermore, the solos were just not compatible with the speed or thrash metal genre. Maybe they could have worked on a traditional metal album. But even this seemed extremely unlikely. In any case, there exist not many albums that feature a 90 seconds guitar solo on the second position. Needless to say that this solo remained meaningless. In view of the above, it became quite evident that the recruitment of Brian McPhee had been a mistake. He did not fit the music of the band. The situation reminded one of Brian Robertson´s commitment with Motörhead.

But Beehler and Johnson also contributed to the incredible bad result. They were equally involved in the songwriting and what came out? The compositions were ridiculous or at best average. Lame mid-tempo tunes were dominating. One had the impression that the group did not want to disturb the audience by aggressive eruptions. The harmless pieces followed conventional patterns and lacked of creative ideas. They were neither thrashy nor fully commercialized. Although they offered a few pleasing bridges, none of the songs was worth a listen. That was also because of a lack of distinctive melodies. Finally, the spoken or shouted choruses did not show any signs of catchiness. They were just desolate. Not one of them reached an attractive level.

But let me come back to the remaining original band members. Dan Beehler delievered an ordinary drum performance while his screaming sounded solid. But he was not able to create unique moments like he had done on "Long Live the Loud", just to give one example. And as always, Allan Johnson acted unobtrusively. But worst of all was the fact that both were not capable to define a clear direction. What is worse, I fear that they lacked the courage. Due to their cowardice, the band was caught between two stools. Shit happens. As a result, the original Exciter died a sudden death and they will never come back. Just listen to Beehler´s unbearable squeaking on his solo album that was released in 2011. It is lightyears away from his former performance. The same applies to this shitty output in comparison with the first three albums of Exciter.