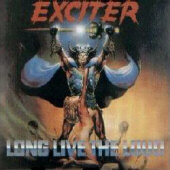 Type: Full-Length
Release Date: 1985
Label: Music For Nations
Genre: Speed, Thrash
1 Fall Out
2 Long Live The Loud
3 I Am The Beast
4 Victims Of Sacrifice
5 Beyond The Gates Of Doom
6 Sudden Impact
7 Born To Die
8 Wake Up Screaming

To start with the conclusion, this is a real speed metal classic, enriched with the best elements of power metal (more) and thrash metal (less). But I guess the poor ones, who never listened to this jewel so far, want to be provided with more information. So I think I'll start again.

No doubt at all, the album shows Exciter celebrating their style of metal at its best. The melodic intro and the fast title track can be seen as a good entrance into this record, but surely they are not the best tunes on it. The outstanding part kicks off with the absolutely brilliant 'I Am the Beast'. Based on a simple yet highly efficient riff you could use for the definition of "neckbreaking", the song starts with high speed, ends with high speed and offers absolutely nothing else intermediately. The following 'Victims of Sacrifice' contrasts with mid-tempo, powerful harmonies, original riffing and a gloomy atmosphere. Nevertheless, it is the second killer, inter alia due to the fact that Dan Beehler's sonorous voice has never sounded better. 'Beyond the Gates of Doom' completes the trilogy, fast, furious and equipped with lyrics that fit perfectly ("beyond these gates you´ll obey or you burn, either way you never return" ...to bad and lame music, I would like to add). By the way, you must pay attention to the elongated scream of Beehler at the end of the track. It provides a unique listening experience.

Unfortunately, after this triple strike I always had to make a short break for starting the B-Side. Good, old vinyl-era! So it took a long time, until I realized that 'Sudden Impact', a compact speed song with apocalyptic lyrics, reaches the same quality level as its three predecessors. The fourth masterpiece on this album... and the last one at once. The final two songs are surely no fillers, but they could have been ennobled with a little bit more power. If I would be forced to favor one of them, I would choose 'Born to Die'. It is more catchy, more fluid and surprises with a speed part at the end. But generally speaking, the entire album offered some unexpected moments and a relatively high degree of diversity.

I may not forget to mention the contemporary sound that gave space for all musicians to prove their skills. Separate to this, Exciter is convinced because of their strong teamwork while performing like a well oiled engine. It seems that they really loved what they did back in 1985 - and my enthusiasm for their approach during the first years is still unbroken as well. Beehler, Ricci and Johnson formed a magical three-piece and complemented each other perfectly. With regard to this fascinating overall impression, it did not matter that the cover artwork was a little bit embarrassing. Anyway, it visualized the power of the album in a suitable manner.

To end with the conclusion... oh, you have read it yet.