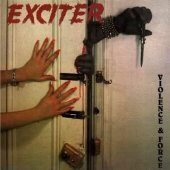 Since its release "Violence & Force" always stood in the shadow of its legendary predecessor "Heavy Metal Maniac". Of course, we need to be aware of the early timing of the debut's release. In 1983, speed metal was still in its infancy. Inter alia due to this fact the debut left a huge impact. But irrespective of this favourable basis, "Heavy Metal Maniac" was legendary indeed. Nevertheless, from my point of view "Violence & Force" is not any less fascinating than the debut. To make this explicit I like to start with the description of the three highlights.

Driven by a mighty riff, the title track explodes rapidly after the noisy intro. It is crowned by a catchy chorus and Dan Beehler's shrill shrieks, but I must not neglect the double-bass based bridge, too. No doubt that Exciter still showed great energy and enthusiasm. Perhaps this may seem like a cliché, but they were young and reckless and did not look right and left in order to see what the others were doing. It quickly became clear that the compositions pointed in the same direction as those on the debut. I interpreted this as a sign of honesty and self-confidence - and I liked it. "Saxons of the Fire", opened by a razor-sharp riff, ran in the same vein as the title track. This applied equally to the energy released and the compositional quality. "Swords of Darkness" hit the mark, too. It sounded a bit less furious, yet it convinced with great melodies.

Exciter focused alternately on heaviness and speed. They handled both in an excellent way. This applied even considering the fact, that the majority of the tunes were strong, but not outstanding. Just take "Pounding Metal" for example, its name is simultaneously the perfect description for this piece. Or listen to "Scream in the Night", everything fits. To mention another example, enjoy the leads of "Destructor", the first tune on the B-Side. It starts with a drum solo performance so that it reminded me of "Heavy Metal Maniac" because its B-Side, in particular "Under Attack", began with Beehler´s drumming, too. Coincidence or calculation? I am stumped for an answer. But I know for a fact that I still like the whole album, every song as well as the clean and vigorous production.

And what about the cover? From a present-day perspective one may choose to call it "racially motivated" or "glorifying violence". But even if it were, there is no evidence of this crap in their lyrics. Therefore I just celebrate the 30th birthday of an album I still can recommend with a safe conscience.