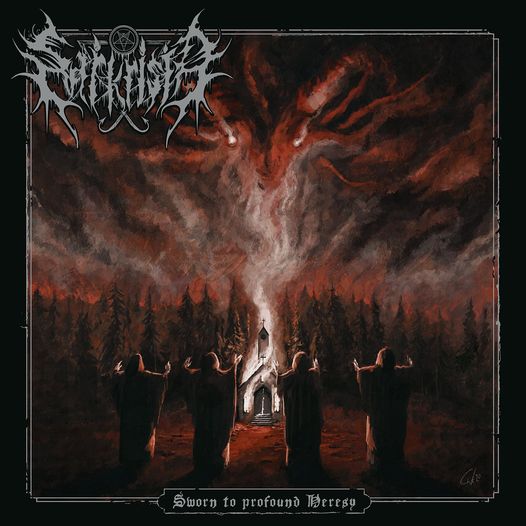 Meanwhile black metallers Sarkrista from Schleswig-Holstein, Germany are about to release Sworn To Profound Heresy, their third album. Stylistically not much has changed, it is and remains the usual OSBM of Scandinavian kind (especially the Finnish scene seems to influence the band), sometimes some black-thrash borrowings in the style of Desaster and consorts sound through. The songs are consistently well thought out and oscillate between extremely fast and mid-tempo passages. The guitars create an icy atmosphere and the drums are played thunderously. The voice is full of aggression and hate and is performed very convincingly. The lyrics are about Satan and blasphemy, also here nothing has changed compared to the good predecessor Summoners of the Serpents Wrath. This is only logical, if according to Sarkrista they make "a great homage to our great master, and eternal leader SATAN!".

This time the band has brought some colleagues from the international black metal scene into the studio for vocal support. On the one hand Lord Lokhraed of Nocturnal Depression (France) may raise his voice on 'The Chosen Ones Of Satan', 'Destroyer Of The Sun' is refined by The Infidel of Curse upon a Prayer (Finland) and AntimateriA supports the band on 'A Whisper From Forgotten Coffins'.

The production is quite punchy, though I miss the bass a bit. But all in all it is worthy of a black metal album. Those who know the previous album should know how this album sounds, nothing has really changed in the sound.

The cover is also kept very blasphemous, it shows a burning church from which the smoke rises and manifests itself to the dark lord. In front of this four hooded figures pay homage. Here, too, the Scandinavian influence clearly comes to light.

Particularly noteworthy songs are 'Lair Of Cursed Remains', a pretty fast black metal cracker, which comes across incredibly hateful, 'Destroyer Of The Sun' is a pretty atmospheric song, which is almost dragging for Sarkrista standards and 'A Whisper From Forgotten Coffins' - a pretty catchy and almost rocking song.

If you like OSBM without big experiments and surprises, Sworn To Profound Heresy is the right choice for you. There is nothing new here, nothing innovative, but just cool black metal without frills.