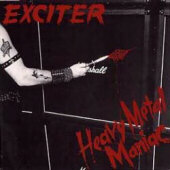 Although I like Darkthrone in general, there is one thing that bothers me. Why on earth does their song "Canadian Metal" not refer on Exciter´s legendary debut? That is a real blunder. However, "Heavy Metal Maniac", recorded in August 1982, justified the reputation of Exciter as one of the first speed metal bands worldwide. The band was fresh and ignited a firework display of unchecked creativity. They divided the songwriting under themselves in nearly equal parts and their pioneering spirit and courage could hardly be ignored. In my opinion, Exciter perfectly expressed the metallic attitude towards life of those days and the effective cover played its part to the full. The dirty and rough production completed the picture.

"Stand Up and Fight" was dogma and mentality at once. Therefore it was only consequential that the song of the same name opened the album after the unremarkable intro. Metal has obviously become part of the mainstream entertainment nowadays, but back in 1983 these outsider lyrics were entirely applicable. This up-tempo-track lived on its drilling riff and the summoning chorus in conjunction with the attitude described before. Beehler did not possess the most powerful voice in metal, but his appropiate screaming was authentic and credible. The title cut represented a seamless follow-on to the opener. The lyrics dealt with the outsider topic again while Exciter slightly slowed down the tempo. The chorus was simple and catchy at the same time.

The last two songs on the A-Side were slightly weaker. The tough "Iron Dogs" dragged on at length while the chorus failed to make this solid piece outstanding and the speedier part came too late. All the same, I have to say that the main riff proved its quality. "Mistress of Evil" delivered a fine bridge with short guitar solo eruptions and was more stringently than its predecessor. In summary, it can be said that the A-Side of the vinyl sounded amazingly good...

...but it was surpassed by the B-Side that was opened by the mighty "Under Attack". Placed directly in the middle between speed and heavy metal, the guitar runs, the gripping bridge and the strong chorus turned this tune into something special. The following "Rising of the Dead" convinced in the same manner. After a hesitant and spooky start, the song exploded and offered a brilliant chorus as well as suitable lyrics that emphasized the eerie atmosphere of the music. A surprising break after 2.05 minutes gave the song a new direction, an indication for an ambitious songwriting without desperately looking for progressive song structures. The same applied to "Black Witch" and its speed part at the end that saved this dark ballad from mediocrity. But let´s move on rapidly to "Cry of the Banshee", the final highlight. Exciter proved their unbridled power once more while the screaming went slightly mad. It appears as if the furious Canadians bent over backwards to bring this album to a glorious end while performing the most intensive tune. The result is that there remains an open question: when will Darkthrone release "Canadian Metal (Part II)"?