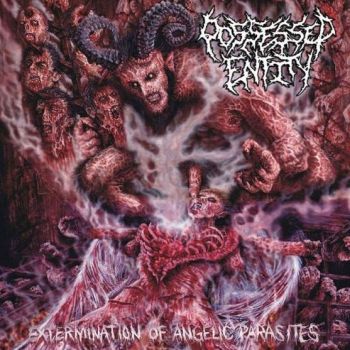 Talk about taking the blunt approach to proceedings. Heavy as a dumpster full of cement and tuned all the way down into the sewer, these fine men walk down the well trodden path of brutal death metal, crushing the concepts of melody in music and subtle nuance to pulp in the progress.

As mentioned, the music sounds crushingly heavy. This aspect of their music is emphasized by the caveman mid tempo the band utilizes throughout their songs, with occasional faster parts popping up every now and then. It all sounds damn massive, that's a fact no one will be able to deny. At first I was of the opinion that it could all use some more speed, but after some more listening it all started to fall in place. It's actually what makes this band the brutish powerhouse that it is, compare their approach to like minded folks such as Sintury and Devour the Unborn. Another thing that plays in this act's favor is that they kept it well under half an hour, it's over before it gets to the point that it gets tedious. Well played, gentlemen.

There are some things that I must mention though. As a first, I'm not that crazy about the pitched vocals. It makes the singer sound like a demonic entity from a cheap 80's horror flick. I've never been that wild about pitched vocals, to be honest. Mind you, it's not unbearable. If you listen to it as part of the whole sound, it isn't that of a distraction. Another thing I've noticed is that the drummer isn't always that tight and occasionally misses a beat, however not in such a way that it becomes a nuisance. And finally, some of the movie samples are a bit naff, sorry.

All in all, this is a pretty cool brutal death release, that primarily stands out because of the crushing, brutal sound and the band's total disregard for complexity and subtle musical nuance. It pounds the listener into submission without mercy, and in the end, isn't that what we all want from a brutal death metal cd like this one?