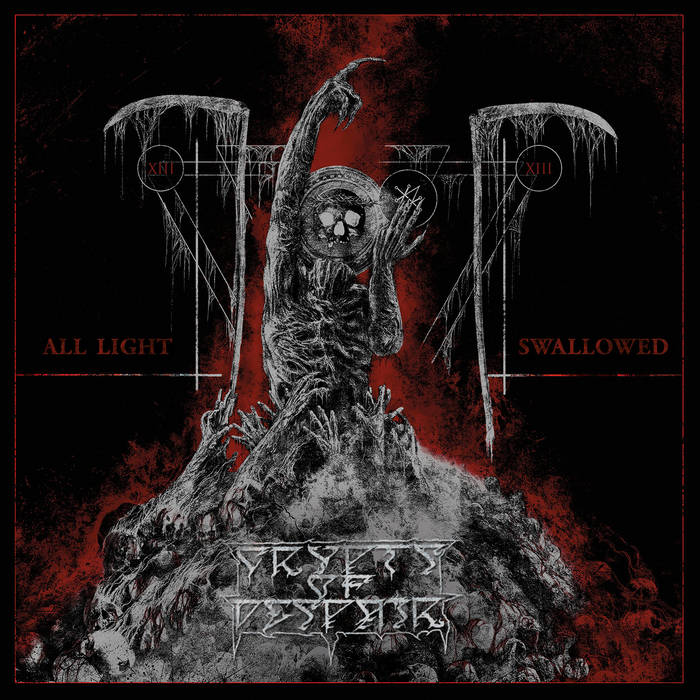 With All Light Swallowed the Lithuanians Crypts of Despair present us their second album. Whereas their first album The Stench of The Earth, if you can believe the information from Metal-Archives, was just released as a cassette in an edition of 20 pieces All Light Swallowed will be released via Transcending Obscurity Records; a name that will surely attract the attention of some listeners, as the Indian label has become a reliable gathering place for interesting death metal bands.

The cover is very invitingly gloomy and lets expect a sinister atmosphere. By the way, it reminds me a lot of the last but one Ascension album "The Dead of the World". So purely visually already a clear "thumbs up" for the album.

Now we come to the really essential part, the music. After a few cymbal hits the listener is overwhelmed by pretty intense, partly dissonant death metal. The songs are mostly bludgeoned through at an incredibly fast pace, but the band finds just the right moments on the album to take their foot off the gas pedal. Through the good interweaving between fast and slow passages, Crypts of Despair manage to create a pretty dark, in places oppressive album. The melodies that the band plays do the rest. The change of vocal register (the band has two singers) between deep growls and higher screams also makes the songs very varied. You can practically feel the gloom that this album spreads through its title alone. All Light Swallowed has become a flawless OSDM album, which makes no compromises or trends, but simply spreads pure hopelessness and despair.

Particularly noteworthy songs are 'Anguished Exhale', which has quite catchy and also nasty doomy parts in parts, 'Condemned to Life', which presents surprising leads and 'Disgust', which is an absolutely hateful song (what a fitting title), in which the two singers present a "wonderful" duet. Only the last song 'Bleak View' the band could have perhaps saved for themselves, as this is a (to my ears) rather boring instrumental piece that doesn't really fit into the overall structure of the CD.

The production is absolutely convincing, every instrument is clearly recognizable and the vocals are also powerful and sonorous. Nothing sounds overdriven or underproduced, all is very powerful and clear. I would argue that the band has done everything right here.

What is the conclusion now? If you like dark OSDM in the style of Krypts, Disma, Chthe'ilist and consorts, you will like All Light Swallowed. Except for the last track, I can't really find anything to criticize about the release. Well done guys!!!