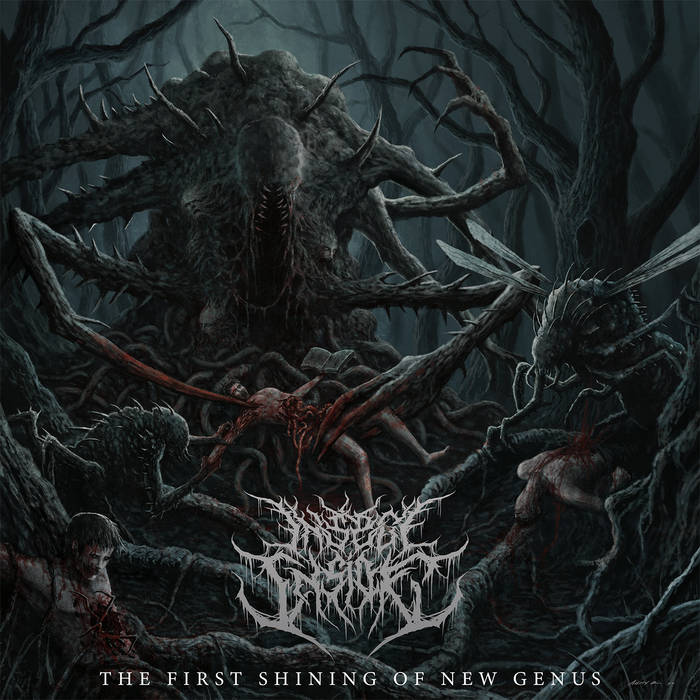 Russian newcomers Insect Inside have released their debut full-length through Gore House Productions a little while ago, and it is a beast!

The First Shining of New Genus is a brutal, technical, groovy release that will keep your head in endless headbanging motion. After a brief intro, the whole weight of the band is thrusted upon your ears, track after track. There's pretty much no rest in this album at all, save the abrupt pauses the band has sprinkled along their musical ride. Packed in these 10 tracks is a wide variety of influences, well combined into a cohesive whole that leaves nothing aside for anyone. Technical riffage? Check. Groovy sections? Check. Low inhuman growls? Check. Drums with abundant variety? You bet! Pretty much all ground is covered for all fans of extreme music. I myself was quite delighted as I haven't heard much modern death metal for a long time.

However, if there is one element that I just can't get over is the extensive use of breakdowns. I understand that this is pretty much a standard for these kinds of bands, but when pretty much every track has at least one slam/breakdown moment, I (personally) want to put the music off. Not the case with this record however, and while there are a lot of breakdowns in the album, the variety on every track compensates for this flaw. Another minor gripe I have is the vocals. They're not bad (in fact I liked them a lot) but there was not much variety in them, save for the tracks that feature guest vocals.

Despite these flaws, Insect Inside has released a polished, brutal record that has something for every fan of extreme metal to enjoy. Featuring guest appearances from Kevin Muller (Soils of Fate, The Merciless Concept), Kirill Nazarov (Disfigurement of Flesh, Decomposition of Entrails), and Roman Vlasenko (Abnormity) they have crafted a monster that, hopefully, will be even more crushing in the future. I may not be a fan of breakdowns and may find some things repetitive, but the overall musicianship is undeniably impeccable and tight, and that is enough for me.