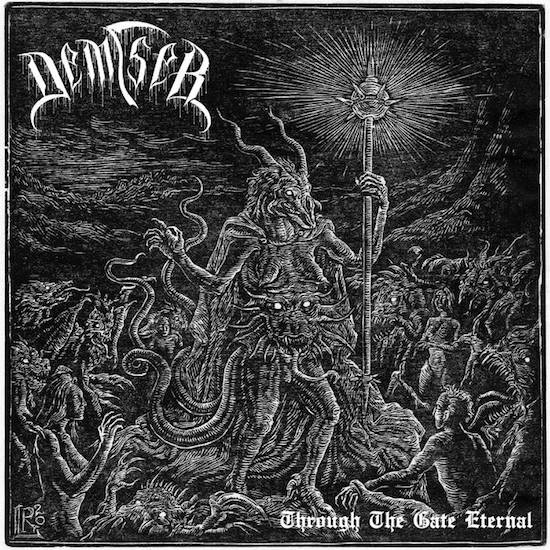 Black thrash metal can be hit and miss sometimes, either there's too little black metal or too much repetition in the thrash. Demiser with their debut full length has just enough of each to sustain attention. And to add to it their album Through the Gate Eternal comes across as one of those tight black/thrash metal albums. Usually loose and sloppy some can be but this one carries a consciousness within the quality of the musicianship. Already displaying favorable qualities that should entice those that have somewhat forsaken thrash all together a listening incentive to give Through the Gate Eternal a try. Glad I did cause I managed to find some great moments to recall when recommending the album.

Firstly the variety within Demiser's debut is cool, no need to worry about mindless repetition as there's more than enough musical delicacies to go around. Most tracks take on a surface level approach early on but begin to loosen the screws to let in some differentiating arrangements. Title track 'Through the Gate Eternal' is a good example that while making its introduction with a scampering thrash assault uses interesting drum fills and diverts towards mid paced traditional heavy/doom metal territory later on. Then as you tread down to tracks such as 'Offering' you'll find that Demiser would sacrifice a bit of speed for those fist pumping moments with a bit more groove added to the formula before reverting to a soloing frenzy.

Rock/metal becomes a more conspicuous facet of the material as time progresses on Through The Gate Eternal. Yet simultaneously keeping a decent amount of thrash metal components active on the record. 'Deathstrike' and 'Unholy Sacrifices' deliver on this feature while even a slight melodic touch would be injected into 'Raw Fucking Vomit' before being struck down by the blizzard of thrashing and blasting beats whilst the guitar-man spits out his six-string-venom. Because there are so many changes occuring, it's difficult to not feel engaged by the music at any given time. Even tremolo riffs appear on this thing that would add a sinister aura to the violent mood exhibited on Through the Gate Eternal.

A melancholic acoustic interval on 'Song of Byleth' then its back with the program. Demiser softens the skin only to apply more pain. Cruel.

Overall it's a good first full length impression that isn't the same old song and dance we know thrash metal is. Demiser tells of a black/thrash unit with sound musical competencies, hence we have Through the Gate Eternal.