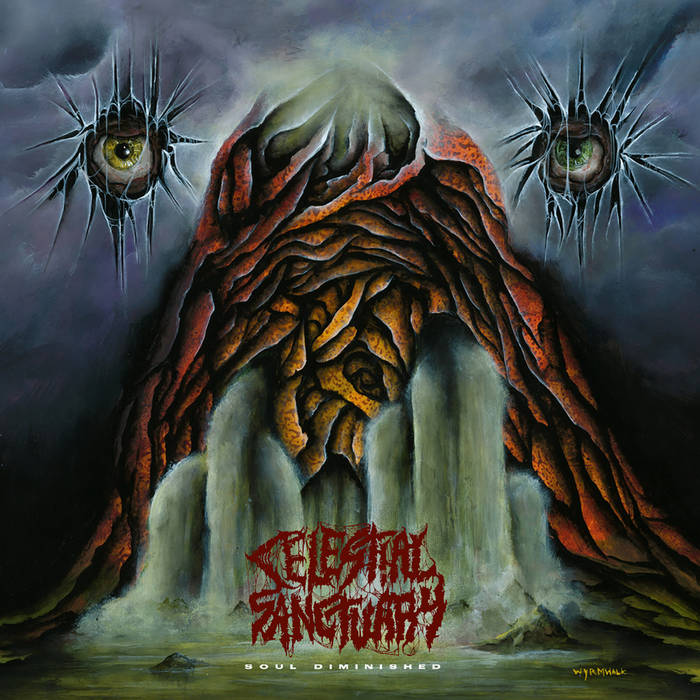 I haven't listened to too much death metal with hardcore influences… I'm not too big of a fan of Gatecreeper, which is probably the current face of this niched brand of death metal, but Celestial Sanctuary definitely feels more aggressive than the aforementioned Americans. These UK death metallers have some absolutely pummeling grooves and a thick production, but it ultimately lacks staying power due to every song following a very similar formula.

There's a good helping of meaty riffs littered throughout this record, simple, catchy and aggressive, which is all you could ask for this type of extreme metal. The pinch harmonics add good accents to the riffs and add a little extra juice to the aggression without feeling too gimmicky. The vocals are especially tortured, wailing away over the music just at the right times, and this vocalist certainly portrays a lot of emotion and anger, and sometimes even fear and angst.

The production is thick, albeit inoffensive and basic. The drums have a nice sound, particularly the kick drum which has a crisp, full feeling that shines when administered at high speeds. The bass is unfortunately drowned out, which is disappointing because I would like to hear this album with a punchier bass sound added into the mix. Everything else is mixed well, but, like I said, inoffensive and doesn't stick out too much. Still, better to have something basic and worthwhile than try something new and fall flat on your face.

If you're like me and find Frozen Soul underwhelming and boring as all hell, give Celestial Sanctuary's debut record a try. They have that Bolt Thrower-esque sound mixed with hardcore elements that might scratch the itch you've been looking for. It might not be the greatest death metal you've heard all year, but it certainly packs a punch and will keep your attention for a good amount of listens.

Celestial Sanctuary did not impress nor did they disappoint with Mass Extinction. The two tracks featured on the Mass Extinction EP seemed to be more like puzzle pieces to a much bigger picture. Also, those tracks seemed to be the mere shell encasing what would soon follow suit. So with much left to be desired from those who made first contact with Mass Extinction, the question lingered in everyone's mind as to what exactly would be the tale of the next output. Not exactly the first impression you would want to create; however provided that soon after a full-fledged album would come full circle with ideal results, the tactic turned out much better than most would have expected.

Bold, very bold, a full length following a 2 track demo, not many go that route, and the ones that do either succeed or fail miserably. Celestial Sanctuary could have easily fallen apart on Soul Diminished, instead, they rose to the task of building a name early on following their debut demo. A collective mass of Incantation styled death/doom merged with (at times) a ritualistic throbbing comes pelting through the strikingly clean production value. One is left to wonder if Celestial Sanctuary meant to put forth this at a late date given its needle eye style of execution.

The thing about flukes is that they usually last a few minutes or a few songs then it's curtain-call. Soul Diminished feels complete and more so, consistent. So well assembled and consciously put together that after every listen you just can't help but revisit the record and inspect as much as is presented on a surface level to even the microscopic details dwelling in between the cracks and underneath the elementary mask of their old school death metal.

Dynamic with variations and diversions populating the likes of 'Relentless Savagery', 'Rid the Gormless' and 'Wretched Existence' that even while possessing inchoate guitar passages fair well when adapting to the diverse drum insertions. Thrash and grindcore elements come to the front at select moments but don't overstay their welcome. In-addition, pinch harmonics appear and find their way to the surface of songs on Soul Diminished thus creating a colorful palette of pieces to pick from.

The production helped out much on Soul Diminished to create the audial impact the record has. Both vocals and drums sound fat, while the guitars have a fair amount of meat around the shriek. There could have been a bit more depth in the song structures, a bit more intricacies; however, the catchy hooks helped to deter attention away from that shortcoming. Some of the better moments appear in the form of and materialize within 'Yearn For the Rot' and 'Endless Chasm' that manage to put a definitive punctuation mark counting down to Soul Diminished final moments. Seemingly better written than the former tracks and has a grandeur appeal that captures the cover artwork.

Soul Diminished is a strong album that shows off the very basics of death metal; however, there seems to be great potential for more sophistication within the writing department of Celestial Sanctuary's music.