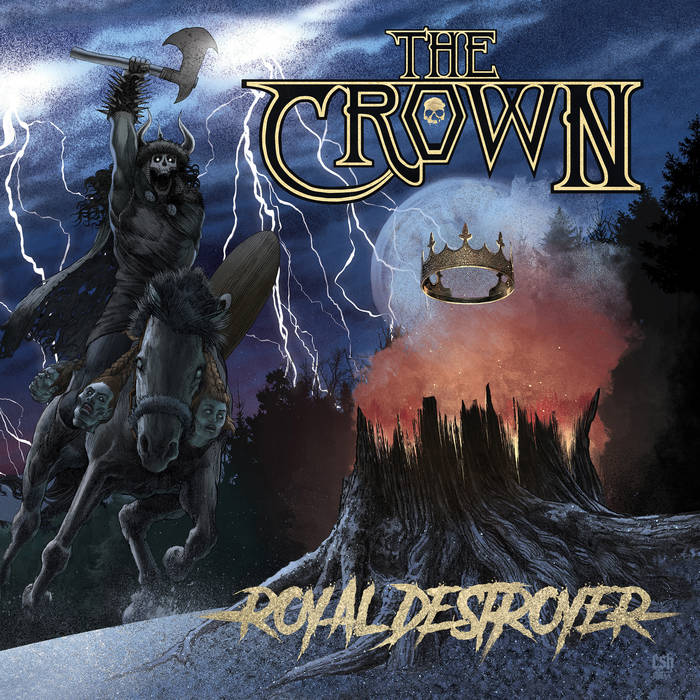 Wow, I'm in for another big surprise in my old age. Last album I bought (and still own) from The Crown is now 23 years old. After the Hell is Here they could not really convince me anymore but with Royal Destroyer it's different.

After a short intro, The Crown hit out with 'Let The Hammering Begin' the first cool song. The guitar riffs remind me quite a bit of old Slayer in places and the drums set a furiously fast tempo.'Motordeath' is a pretty cool song title and from the structures of it, a typicalThe Crown song. 'Ultra Faust' (also a cool name, because Faust means fist in German), which starts pretty dragging, but in the further course increases in speed and from the vocals and intonation reminds me of David Vincent in "Illud Divinum Insanus" times. 'Glorious Hades' is almost an epic song already in which the guitars remind me of Bathory's Viking phase. A pretty calm mid tempo song that spreads great atmosphere.

The next two tracks are again typical The Crown songs, which offer no big surprises. 'Devoid of Light' is a homage to Morbid Angel at "Domination" times. The song structures and the vocals at the beginning sound absolutely like "Where the Slime Lives", but the song picks up speed little by little. 'We Drift On' is another slow song, which strongly reminds of old Metallica or Heathen from the guitar arrangements. A song that definitely creates goosebumps and leaves you slightly melancholic. 'Beyond the Frail' at the end is another highspeed song, which however does not beat through continuously, but offers a certain variety.

The question remains. Why haven't I really paid attention to The Crown in years, but find Royal Destroyer really compelling? I think it's because of the varied songs that don't sound the same as in the past, but offer some surprises. Cool disc!!!!