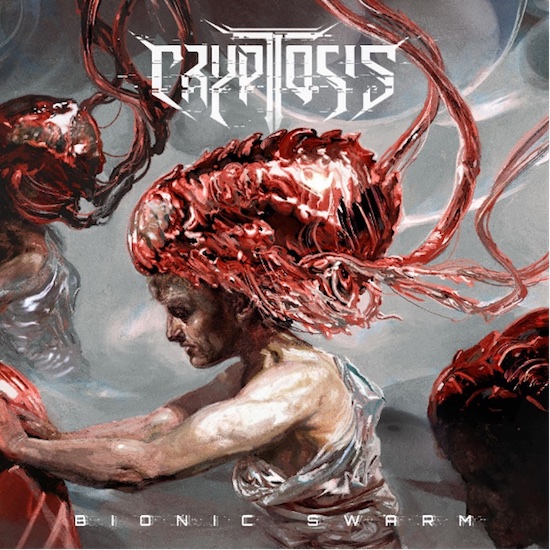 Thrash metal is no academic style. It is about transforming energy into sharp riffs and restless drumming. This kind of music has nothing to do with reading a book, the evaluation of scientific experiments or a forum discussion on the preservation of the pension system. On the other hand, there is progressive metal. This is the genre where musicians do not think about creating a good song, but how to confuse the listener irrevocably. That’s why they integrate a million twists and turns into every song. To be clear, I speak about twists and turns nobody has ever asked for (with the exception of the artist’s own ego). In short, thrash metal is god-like, progressive metal is nonsense. You can disagree with this conclusion, but only if you want to branded as a liar.

Despite this undeniable truth, Distillator, oops, Cryptosis have decided to change sides. It's a pity they didn't fall into the nearest Dutch gracht when they moved to the other bank. The cold water might have brought them to their senses. Statements like “we were a little bit bored with the typical thrash metal genre and the boundaries that come with it” are simply hard to understand. Thus, I was willing to give their shitty egghead album a rating of less than 50%. No discussion about that! But, irony of fate, neither did they change their style drastically nor am I able to ignore my enthusiasm for Bionic Swarm. Okay, there are some “intellectual” trace elements like the artwork. What the hell does the guy with the oversized Pippi Longstocking wig wants to tell us? But I want to be honest. If someone would have sold me this work as the new Distillator album, I would have been satisfied. Let’s neglect the non-essential intro and the intermezzo on the sixth position and concentrate on the regular tracks.

'Decypher' is a total failure – but only if it wants to demonstrate the new progressiveness of the trio. Vice versa, this means nothing else but that we are receiving a pretty straight, fast and razor-sharp killer that holds a lot of Distillator in it. But okay, this was the first published song after they had changed their name. 'Prospect Of Immortality' marked the next output they released under the new banner. It’s slower, ominous and presents more breaks, not least due to its playtime of more than six minutes. Nevertheless, the song is always comprehensible and in particular its instrumental part – which starts after roughly two and a half minutes – surprises with wonderful yet apocalyptic harmonies. Although this tune has a kind of technical (sci-fi) note, it also still reflects a connection to Distillator’s second album; remember “King of Kings”. However, maybe the third single after the renaming made them sail to new shores? The answer is no. Speed demons have again taken possession of the band and the number fascinates with another dose of cutting, slicing and piercing riffs and lines. Not to mention the solo. There is so much of their former approach in this smasher… maybe I should not speak of a Cryptosis song, but of a Cryptillator track. Anyway, even the fourth single 'Death Technology' is an attack of merciless cruelty – the bulky riffs at the beginning point into the direction of progressive thrash, but they do not characterise this outbreak of unbridled ferocity. In short, it remains a mystery to me why they changed their name.

Okay, it’s natural that the expressive, passionate vocals remind us of the old numbers (even though the high-pitched screams do not occur again). Nevertheless, to me it is obvious that the guys from Enschede did not cut their roots completely. Maybe this act of emancipation from the own past will follow (and lower the quality of further works). But this is not my topic today. I just can say that brutal yet large-format songs like 'Conjuring The Egoist' break through the barricades with a maximum of power. Perhaps these dudes are just too competent to compose faceless pieces, even if they stumble in a kind of premature midlife crises through the wrong genre? But up to now, they still stand with one foot firmly on the hallowed ground of razorblade thrash. Indeed, 'Mindscape' adds a little symphonic touch, but even this element does not hurt the mercilessly sharpness of the composition. Frankly speaking, I was in (more and more desperate) search of a filler, but I did not find one. I regret that Bionic Swarm does not possess this completely insane intensity of Distillator’s contribution to the split with Space Chaser, but it is also light years away from delivering lukewarm or slack material. Therefore I have no reason to grumble. Moreover, I am happy that the production is perfect from my point of view: clear, direct, with a lot of pressure. I wonder if it lacks coldness, because a lot of technical thrashers want to illustrate their mechanized music by this trait. Cryptosis is different, and that’s a good thing.

Lyric-wise, the dudes were already in their former life interested in “typical technical thrash topics”. Titles like 'Mechanized Existence', 'Algorithmic Citizenship' or 'Swarm Intelligence' (most furious Dutch thrash song of all times?) proved evidence. Bionic Swarm seems to be linked especially with the song from the split with Space Chaser. Swarms everywhere! Too bad that I am still a stupid individual, but I digress. The full-length concludes with 'Flux Divergence'. I have no idea what this is (as mentioned before: stupid individual called Felix 1666). Anyway, the song puts the focus on uncompromising velocity again. Not very progressive, but great. Thus, I do not know whether the band wants to get applause from my (old school thrash is king) side. But I can't write a bad review for this “debut”. If I did, I would have to immediately change my name to Liar 1666. And honestly, I'm sick of name changes in relation to these three very capable Dutchmen.

I find a lot of new thrash metal bands on the market quite ambivalent to unbelievably overrated, (to put it in friendly words) but the debut album Bionic Swarm from the Dutch band Cryptosis, which will be released at the end of March comes across pretty convincingly over large parts.

Let's start with the cover. It's quite sci-fi like and I personally think it's quite well done but I also like science fiction.
Musically, according to the press information, the band is for fans of Coroner and Demolition Hammer. I can't really understand that now, because I find that the band has a stylistic quite similarity with Vektor, only that Cryptosis are not quite as challenging, but do a kind of technical thrash that you can get into, how shall I say, more relaxed. This is not to say that the band makes undemanding music, the songs are very lovingly composed and know how to grab the listener from the very beginning.

The tracks are sometimes quite intricate structures and one is always amazed at the twist and turns that come there. What also makes the songs quite interesting are the keyboard parts, which are used again and again subliminally (Nocturnus (A.D.) send their regards). In the slower tracks like 'Prospect of Immortality' there are similarities to slower Napalm Death songs, but slow tracks are rather scarce on the album. The band is almost constantly stepping on the gas pedal and lumbering through their cosmos. In any case, one always discovers new stylistic elements when listening to the album several times so I have the impression that not only the above-mentioned bands, but also thrash bands like Exodus, classics like Iron Maiden and also black metal (listen to the riffing on 'Mindscape' more closely) have had influences on the songwriting of the band.

Standout tracks on the album are 'Death Technology', which is pretty catchy and cool in terms of riffing and showcases the band's technical prowess, 'Transcendence' is an incredibly fast, technical track with atmospheric keyboard backing and 'Game of Souls' is a very diverse song that again showcases the band's technical prowess. However, there are also passages in the songs that seem a bit uninspired and unstructured (for example in 'Prospect of Immortality' or 'Mindscape'), but over long stretches the band can convince at least me.

Since I already mentioned Vektor as an influence several times, it's not surprising that the band will go on tour together with them (it's announced for Europe in May at least). I'm curious if that will work out. I would be happy to see the guys live. So if you like technical thrash, you should not miss the debut of the Dutch, you will not be disappointed!