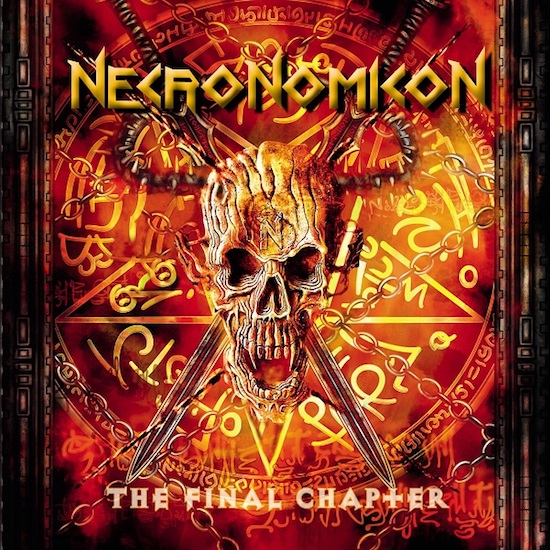 Another band joins the relatively exclusive club of those who have released at least ten long-playing records. Necronomicon, Destruction's geographical and stylistic neighbours, strike up The Final Chapter. I can't say whether it's the quartet's farewell work. The title suggests it is, but there are no other indicators. Yet it doesn't matter, because even if the colleagues around Freddy would only concentrate on the after-work beer from now on, I would still be spared from depression. In other words, I admire Freddy's perseverance, but the group's compositional qualities were unfortunately never competitive when it came to spearheading German thrash metal. What that means in international comparison is anyone's guess.

The Final Chapter also exposes the song-writing weakness. 'I Am the Violence' opens the thrashy dozen with a one-note chorus that could hardly be worse. Why the group chose this song for the first position is not clear to the listener, because after the also insipid title track, the material gains in class (surprisingly). The old school thrash adds a touch of sharpness, power and cutting edge. 'Wall of Pain' not only has a strong riff, but also a pretty cool staccato bridge. A nonsensical spoken intro to 'Purgatory' immediately puts the brakes on the euphoria, but apart from the beginning, this track also knocks every schnitzel flat. 'Burning the Fury' is also fun. A strong riff rolls out the carpet for a guitar melody, then the double bass takes over and beats the track over the finish line.

At this point I must rudely interrupt myself. If anyone ever gets their hands on the biography that comes with the promo pack: don't believe a word of it. It is simply hogwash that "fans and media alike responded enthusiastically to the debut album". It's a lie that "the interest in the band continued to grow significantly worldwide" with the release of the second full-length (at least in Germany nobody took care of the band) and to call Escalation a "legendary album" (6 out of 10 points in the Rock Hard magazine) puts the crown on it all. The text continues in this tone, and with all due understanding of advertising, these lines border on body injury. I think Necronomicon would do themselves a favour to be realistic. They've never been a magnet for the masses, but their name always stood for an honest thrash band. That's okay, but then you can't throw honesty overboard in the promo text. Just my opinion.

Let's get back to the album which should have deserved a less generic artwork. 'Spilling Blood' illustrates the dilemma of the band while offering light and shadow simultaneously. The soft intro is going nowhere, until militaristic drum rolls add a threatening touch, the explosive chorus sounds great, but the stereotyped, wannabe emotional "ohoho" choirs after the second chorus do not send shivers down my spine, they just suck. Nevertheless, Necronomicon have forged a decent work. The majority of the tracks have some decent parts like the choruses of 'Selling Nightmares' or 'World on Fire' and honestly speaking, that's more than I expected. Apart from song details, Freddy still sounds like Schmier minus high-pitched screams, the technical skills of the formation are beyond doubt and the robust, transparent and guitar-dominated sound helps the album to make a statement. It's sad that Freddy never stood on the bright side of life with regard to Necronomicon – hopefully he did so in his private life – and it would take me by surprise if The Final Chapter would change this situation. It's an album that does not draw back on the punk elements of Necronomicon's early days. Instead, it's another dose of pure thrash with the fiery, compact 'Me Against You' as the final climax and that's a good thing – even if they will never reach the top of the bill.