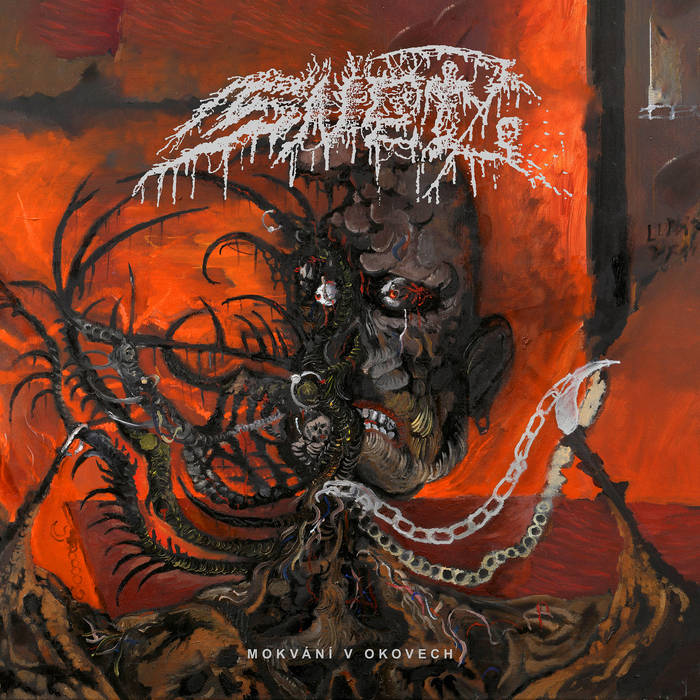 Czech band Sněť will release their debut album Mokvání V Okovech on May 14th via Blood Harvest. Since I don't speak Czech, I can only judge from the music that the album is not about love, flowers or cupcakes. Mokvání V Okovech is a pretty vicious death-doom bastard that mills through the listener's auditory canals in stretches of groovy mid-tempo parts and crawling rhythm passages. The sawing guitars, the wonderfully rumbling drums and the singer, who rattles his soul out of his body and sounds as if he had to leave this life immediately, let a wonderfully musty and morbid mood arise. Maybe it's time for spring cleaning in my dark, damp cave.

Particularly standout songs include 'Demon' (I can understand Czech after all!!!), which is a pretty fast song, but also has some cool mid-tempo elements and invites you to bang along. 'Folivor' is a somewhat slower track that waltzes through the speakers for just under 3 minutes and features some pretty vicious riffing and of course the pretty sick vocals. 'Sarkofag' (another word I understand!!!) starts with an almost thrash-esque opening riff, which soon turns into pretty classic death metal riffing and delivers very varied breaks. 'Vesmírná Saliva' is a kick-ass last song, which reminds me of Bolt Thrower when the tempo is slowed down, but otherwise also knows how to convince.

In my humble opinion, the band has managed to release a solid and convincing debut, especially because of the absolutely sick vocals. Apart from that, they sound very cool in Czech (with Master's Hammer, for example, it always sounds a bit strange, even if they also like...). If you like bands that play absolutely sick death metal (I'll mention Funebrarum, Funebre, Demigod, Incantation...) in particular, you should check out Sněť at least once. Apart from the music, the band also has a cool cover for their debut, I don't even have to mention the totally cool logo!