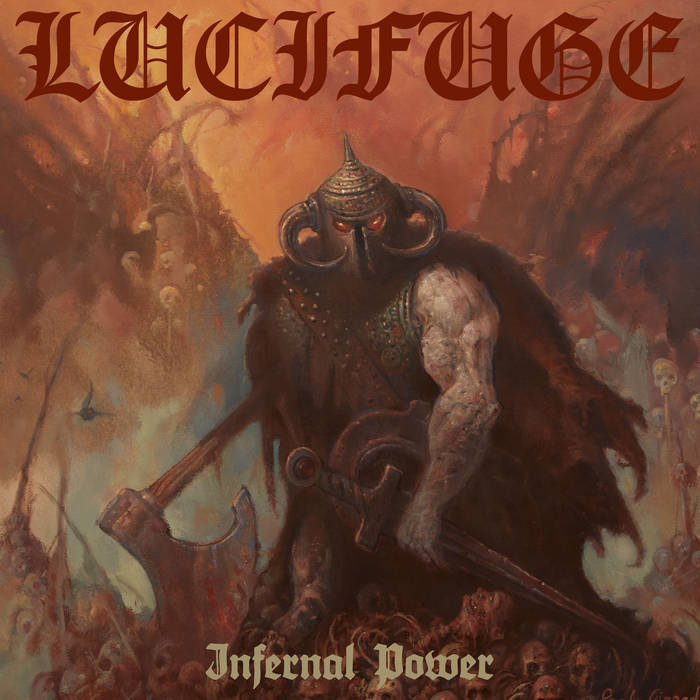 Shit, this one is difficult to assess. Lucifuge's fourth full-length has some highs, but also some weak points. I'll just pick out 'Black Battalions' now. The opening is a 98% copy of Venom's masterpiece "At War with Satan", a plucked bass with a distinctive riff over it that hardly differs from that of the legendary classic. A tedious Maiden-esque passage follows, before the tradition-conscious protagonists decide to shift up a few gears after all and add a very fluid, amazingly homogeneous main part, which still seems to lift the piece into the 70+X % range. A rather mediocre, squeaky guitar solo, however, introduces a very weak ending. What should one think of this? Frankly, I have no idea. But what is certain is that the very old Venom are a considerable influence for Lucifuge. Already in the opening title track, the break after two minutes shows clear parallels to the famous "Lay Down Your Soul" sequence from "Black Metal". The somewhat very strong reference to the old gods unfortunately stands shoulder to shoulder with the unfortunately pretty cheap riffing in the track that gives the album its name. An impressively imaginative name, by the way.

Be that as it may, 'Black Battalions' might be a special case. Fortunately there are also easier to judge songs on Infernal Power. You could almost use the ingenious 'Leviathan Arise' as a lesson in black thrash for Norwegian youths, because every note sits here and there is no lack of a nasty aura either. 'Temples Of Madness' also leaves nothing to be desired in terms of high speed. The riff, however, is more of a bastard of thrash and speed metal and thus points in a slightly less ugly direction than the guitar work on 'Leviathan Arise'. Still, it's a song that makes you feel good.

Lucifuge stoically thrash their way through the very old school in the further course of the album. 'Black Light Of The Evening Star' basks in speed metal riffing that sounds one-to-one like the eruptions of the Italians from Baphomet's Blood. Other songs have a black thrash edge. Regardless of such small stylistic variations, the dust of the eighties is thick as a meter on all the tracks here. Anyone who let themselves be frozen in an ice chamber in 1983, and now gets out again in good condition to listen to Lucifuge, will be surprised that there was no further development in our music for 38 years. But well, stagnation can also be enjoyable and the suspenseful beginning of 'The Doors Of Hell May Shake' secures additional plus points.

After nearly 35 minutes, a record comes to an end that ultimately convinces not only thanks to an adequately dirty and powerful production. Lucifuge know how to present their rancid song formula relatively fresh and powerful. As mentioned at the beginning, not every idea leads to a good result by any means, but the positive sides outweigh - and despite the almost romantically titled finale called 'Midnight Sun', no one has to fear effeminate laxity here.