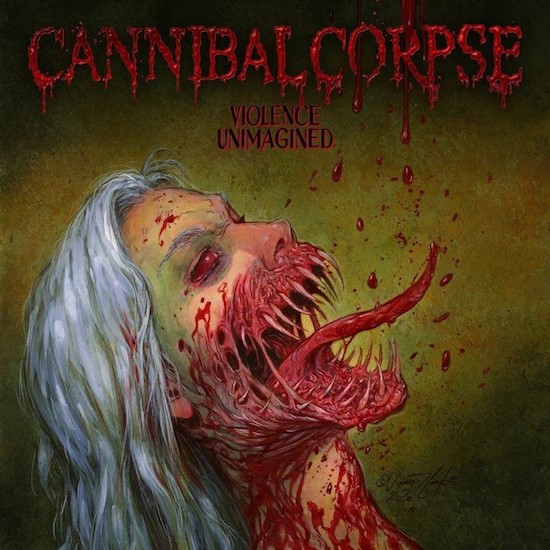 This is the first Cannibal Corpse album featuring Eric Rutan on guitars after 15 years or so of working with him as a producer in the studio. The behaviour displayed by Pat O’Brien when he was fired completely justifies the decision of the band, in my opinion. My hypothesis is that they told him he was out when they came back home from the gigs with Napalm Death and then Slayer’s final tour; probably the relationship was already strained due to his eccentric personality and radical political views, but the music they did together somehow still functioned - Torture for example, is in my top 3 of CC’s albums- but Red Before Black was kind of a lackluster. I had the opportunity to watch them live a couple of months before Pat’s outburst and I could tell he was still ripping; playing solos exactly as they are on the records and such, but composition-wise the band needed a breath of fresh air. Don't get me wrong, Red Before Black is still a solid CC album but you get the feeling they can do better, as they did here on Violence Unimagined.

Eric Rutan’s contributions on songwriting -tracks 4, 6 and 10- begin with 'Condemnation Contagion'. It’s funny how it sounds like Jack Owen’s songs or even Rob Barrett’s stuff, old-school and totally Cannibal Corpse' It’s like he worked with the band all his life. I have played in death metal bands too and CC’s influence is so present even on our amateur riffing style, I imagine it’s not hard to mimic for someone as gifted as Rutan. Track 6, 'Ritual Annihilation' has a hint of Hate Eternal’s epic sense of melody in the beginning but when the verse kicks in along with the vocals it is like a classic CC song. 'Overtorture' is faster and shorter; not like Pat’s ultra technical pieces, but it still kicks ass big time.

The rest of the album is a tribute to their earlier works, a way to distance themselves from the most technical stage of the band and to write more memorable songs. Both singles are credited to Rob Barrett and they actually take you back to the golden years of Chris Barnes’ era. When they came out I thought this record was going to be something like Butchered At Birth; in the end it sounded like Bloodthirst, another one of my top 3 alongside The Bleeding. Webster’s pieces are a little bit more technical with those insane bass lines, while they avoid falling in the wankery nonsense pit. Enjoyable as it gets, I recommend this to any Florida DM fan.