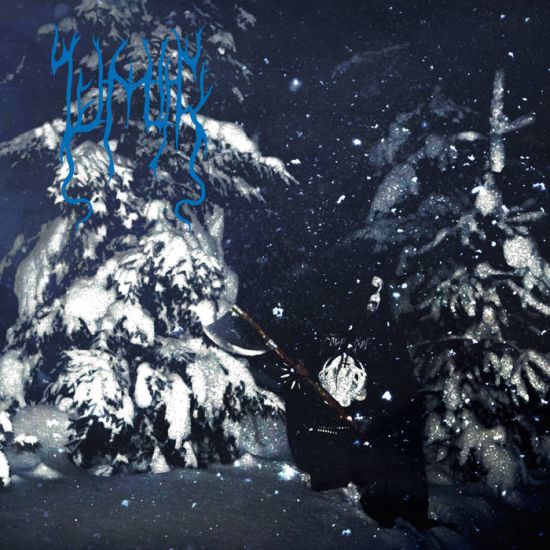 You don't have to be an expert in Finnish black metal to have an idea of roughly what Ymir's debut sounds like. If you have heard an album by Odiosior, Ordinance or Malum once, it only takes a small mental transfer to imagine what style Ymir might play. Of course, there is a cold atmosphere, which is primarily based on icy guitar lines. The almost nine-minute opener invites the listener to take an extensive bath in the ice bucket. Sombrely looming keyboards darken the sky even more. In their best moments, their use is reminiscent of the early masterpieces of the Emperor, to build a bridge from Finland to the west. No question, dark grey clouds are gathering in the sky, driven across the land by a merciless wind. But when a band takes the tiny period of 23 years to record their debut, you can expect at least a small whirlwind.

Excuse me for a moment, someone is raising the hand back there and wants to ask something. What do you want to know? Whether the music on the self-titled album is original? How such questions bore me. The answer is no. Does anyone want to ask a more intelligent question now? Do I mean that black metal has to sound original? This question is better, even if the answer is the same as before. No, black metal doesn't have to win an originality award. But it must have a cruel note, which in Ymir's case is achieved by the fervent screaming and nagging. While some instrumental sections may enjoy a more or less smooth, relatively clearly pronounced melody, Lord Sargofagian's voice is a constant reminder that we are not at a children's birthday party here. In addition, the material has a good measure of that typically Finnish, melancholic heaviness that can long since be considered a black metal trademark.

The appearance of typical genre elements is accompanied by the complete absence of external approaches. This does not lead to the highest level of listening pleasure all the time, so 'Winterstorms' could well have been shortened from six to four minutes. The track does not lack coherence, but it does miss enough good ideas and a higher degree of aggression. The appropriate production, which has that famously creepy, dense touch, is of little help here. Besides the clanging guitars, neither drums nor vocals come up short, so more or less everything fits here. Be that as it may, no sound engineer in the world can animate a relatively lame composition to run. But I don't want to spend too much time on the minor flaws of the album, because overall it is unquestionably another document of Finnish quality metal. 'Silvery Howling' and 'Resurrection of the Pagan Fire' are the names of only two tracks that convince with their fast snare, their abysmal harmonies and their very solid basic substance. It is not only the experts who are happy about such tones from Finland.

Over the years there have been a large number of different approaches in music and lyrics within black metal with equally mixed results. One of such styles is the more pagan side of black metal, bands of what’s described as “pagan black metal” tend to focus on exactly that, pre-Christian pagan beliefs and musically incorporate more folkish and even epic elements, and of course the influence of Bathory in that area can’t be understated. In 2020, the controversial label Werewolf Records in allegiance with Lord Sargofagian of Baptism fame and his brother Vrasjarn brought the debut self-titled full-length album of the two brother’s long dormant pagan black metal project, Ymir.

It's interesting how Ymir as a project existed for over two decades and released just two demos, however given how both Lord Sargofagian and Vrasjarn are very prolific with their other endeavors, it's not entirely unreasonable to see why this project slumbered for so long.

Those familiar with Sargofagian’s main band Baptism would feel an instant familiarity listening to this record as it hearkens to some musical elements to Baptism, primarily the melancholic melodies and aggressive drumming, however this project has a major difference with that band, namely the atmosphere and overall execution of the music. The sorrowful melodies in Ymir have various tinges of folkloric musicality, but what’s interesting is how there’s no overly folky instrumentation beyond a very subdued keyboard for added effect in some songs. Usually pagan black metal bands tend to go ham on bringing traditional instruments to pay tribute to their pagan ancestors, in here it isn’t the case, guitars, bass, drums, shrieking vocals, and already mentioned, very subtle keyboards. The actual music is also very raw and aggressive, leaning more towards classic Norwegian style black metal in the vein of early Enslaved and Taake, albeit with the trademark Finnish melodicism most fans of that regional style would associate to bands like Baptism. But the key difference is in the atmosphere. The music’s overall feel as a whole is one of a cold and bitter winter, a frozen desolate wasteland, and the effectiveness of the execution lies in how the band used a minimalist and primitive approach to create such a grand and sprawling sound with a balanced focus on both aggression and atmosphere. It's actually impressive how the band achieved such an epic sounding album with the most basic of instrumentation and in a surprisingly short amount of time. Just over thirty minutes of music, a testament to the ethos of black metal that Fenriz of Darkthrone always talks about.

That being said, while I can safely give this album high praise for being so innovative to achieve its ambitious sound, taken as a whole this record is not that different from other older black metal or pagan metal records. I can certainly respect the “no BS” approach and adherence to the spirit of the subgenre, but as it is, this is an album that’s kinda stuck in the late 90’s sound of black metal, which is made evident by the fact that this band was dormant for so long and no other meaningful released beyond two demos that at this point can barely be found online if at all. While it is a legitimately good album with memorable moments and noteworthy aspects in the musical execution, it just feels like a weathered tree in a frostbitten forest, it can stand out in sheer size and age but the same snow covers all the woodlands.