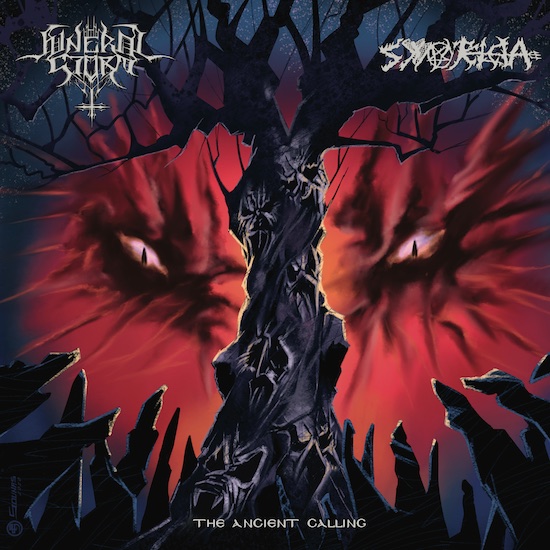 It is quite remarkable what has been brought to light (or better into the dark of the night) in the last few months in terms of releases from the Greek black metal scene. With the 7'-split The Ancient Calling of the two bands Funeral Storm and Synteleia I have another high-class (albeit short) release of the label Hells Handbangers Records. Both bands have already released one full-length album each in 2019 on this very label, Funeral Storm likewise a couple more split albums with other Greek bands. So much for the general information about these two (so far unknown to me) bands.
Apart from the incredibly hideous cover, reminiscent of some late 90s cover art, what can we expect on this split?

Funeral Storm start with a very epic intro that turns into catchy Hellenic influenced black metal that reminds of the first Rotting Christ CD ("The Fourth Knight of Revelation) especially in the beginning. The riffs in 'Mistress of the Night' are kept quite simple and monotonous, and the whole arrangement reminds of the already mentioned band. Towards the end of the song, however, Funeral Storm picks up the pace and the song gains variety. Funeral Storm won't get a trophy for especially high originality for this, but I can imagine that they don't want that at all, but rather a trophy for arousing nostalgic emotions. But it is also not surprising that you can see some similarities between Funeral Storm and the more famous bands of Greece, because their singer is Necroabyssious, who is also active in Varathron and Katavasia. Well done, if you like old school black metal of Greek style.

Synteleia (Greek for "end") also play old school black metal, which after the first sounds can also be located in Greece. However, the band doesn't present us such a monotonous sound structure, but the track "Stellar Return" is peppered with many breaks and also a keyboard is used again and again, so that this song seems a bit more interesting, especially after multiple listenings. Also here you can recognize the clear influence of the better known black metal bands of the country, whereby here also many parallels to Thou Art Lord or Varathron can be recognized. The tempo of the song is also kept in the mid-tempo range and impresses with its melodic parts, partly very gripping riffs and solos and the already mentioned keyboard backgrounds.

As a conclusion, one can say that the title The Ancient Calling is quite successful, because the two bands skillfully manage to create reminiscences of the old "masters", but also (especially Synteleia) to keep a certain independence. Thumbs up!!!