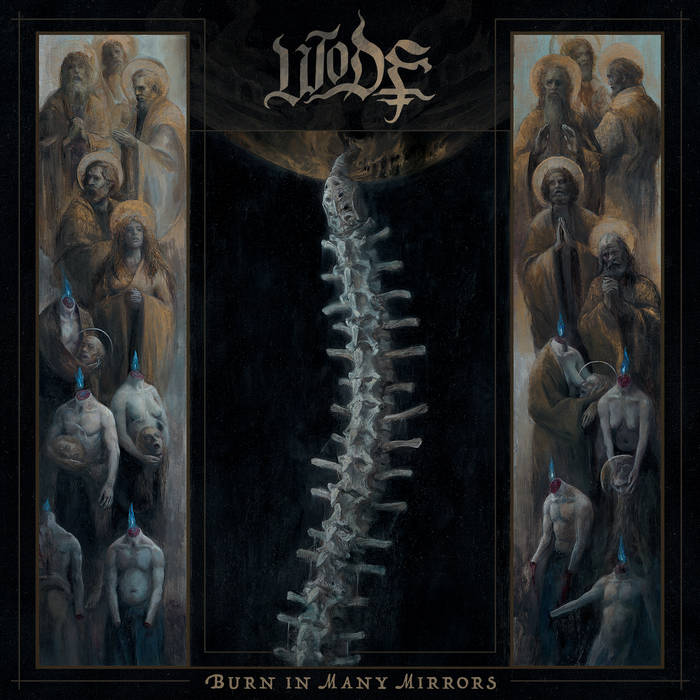 A short roll of thunder and off goes the wild ride on Wode's third studio album Burn In Many Mirrors, released on 20 Buck Spin. The label's name already speaks for itself, and I must admit that I haven't heard such a varied album in a long time. The quartet from Manchester, UK manages to mix different styles of heavy metal superbly. The result is a hidden gem that regularly makes it into my CD player since the first listen.

Each song on the album stands for itself, and nothing sounds familiar from a track previously heard. Wode manage to surprise with every song and to captivate and grab the listener with their melody arcs. Even if I sometimes have the feeling that the guys want to pack too much into their songs, everything fits together and makes perfect sense. That is the most important thing for a very diverted entertainment. Wode also manage to pack highly melodic passages into their songs so that it does not devolve into kitsch á la Dimmu Borgir, but still spreads a certain evilness. I belive that this is due to the fact that the band incorporates breaks and hooks again and again, which spray brutality and roughness.

'Lunar Madness' grabs with its rawness, which almost seems to break out into chaos, but Wode always manage to let the song find its way back into structured tracks. Frenzied guitars and thundering drums determine the track and the vicious vocals of T.H. and M.C. give the whole thing a fitting framework. 'Serpent's Coil' serves up thrash elements, which are paired with classic heavy metal riffs and represent a highlight of the album. The break at 2:20 is the hammer alone! The whole thing is mixed with black metal riffing and comes out as a mega catchy song. 'Fire In The Hills' starts as a slightly doomy, somewhat dissonant song in the style of Deathspell Omega or Misþyrming, which eventually turns into a cool mid-tempo stomper and convinces with dramatic riffs and surprising twists. A real black metal fireworks ignite in the middle of the song. Hypnotic vocals in the style of old Mayhem on "De Mysteriis Dom Sathanas" mix with frenzied guitar riffs, and the song lives on its rich variety. The following track 'Sulphuric Glow' reminds of new Tribulation or Cloak by its arrangement, only not in Gothic realms, but as a rocky black metal variant. Again, the melodic line is captivating, here and there something of Iron Maiden sounds through, to then drift into fast black metal again. 'Vanish Beneath' makes me think of blissful Darkthrone times in 1995 ("Panzerfaust" anyone? okay, they also "only" stole from Celtic Frost, but still cool). The whole thing is paired with somewhat rockier Satyricon borrowings from the "Rebel Extravaganza" era. The last track (the trilogy) gives the album a worthy conclusion. The track starts with a slightly hallucinogenic keyboard passage (the caterpillar from Alice in Wonderland floats here constantly in my mind's eye), but in the second part turns into a pretty death metal-like neckbreaker, to then say goodbye to the listener at the end with impressive classical guitar riffs and a slightly slower pace.

I must say that I have now heard the album very often and still discover new facets that I had not noticed before. Not only songs themselves know how to convince, but also the production of the album is really successful and those who have the time and leisure, should take a closer look at the cover of the album which is very lovingly and detailedly designed.

If you like varied melodic black metal, you should definitely give this album a listen, because it really deserves it!!!