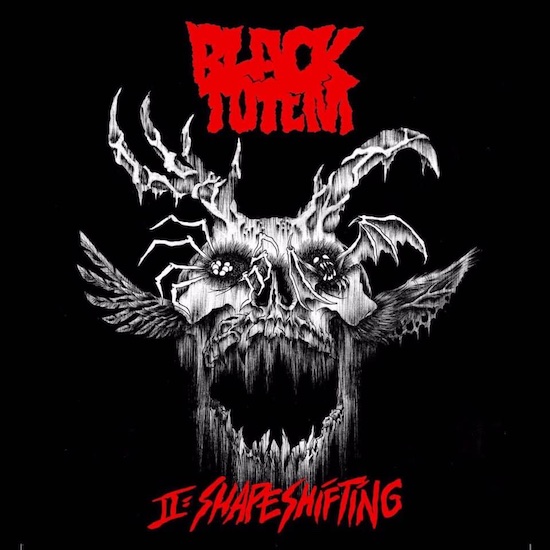 Do you remember Danzig? The tall dude who came to fame thanks to The Misfits, his acclaimed solo career in the 90’s and then making terrible cover albums and the movie “Verotika”. If yes, then you might ask what does Glenn Danzig have to do with this band called Black Totem? Well, for starters, Danzig has had a very significant influence in a lot of metal and punk, and this band is an example of that.

Black Totem is a Finnish band that play what’s basically an amalgamation of deathrock, blues, punk, doom metal and black metal, with a not subtle influence from good ole’ Danzig through the vocal work of “Spit Poison”. Black Totem is now releasing album number two, appropriately titled II: Shapeshifting and to be released by Svart Records. Also, I brought up Danzig earlier because the first thing that I noticed that might not be a good selling point is how reminiscent Spit Poison’s vocals are of the old rock icon (since Danzig is one of those voices you either love or hate) and its so distinct you can tell when someone was inspired by him. That being said I do have to admit that Spit Poison does have a thundering voice and it suits the music perfectly, the additional vocals of bassist “Wera Wolf” (get it?), also may give it that extra layer of personality to make it distinct.

Which finally brings us to the music and this is where Black Totem truly shines like a bonfire in the night. They’ve created some truly wicked tunes with enough grit and filth to impress black metal fans but with all the rock swagger and punk attitude to be accessible, and that’s because underneath all the fuzz and distortion of the guitars and bass, the riffs and hook are very catchy and downright infectious. The band switches from pure Motörhead moshing to some horror punk grooves, and as a whole the album is a fun ride from beginning to end, which aided by the brief but meaty runtime of 30 minutes. The guitars and bass truly shine here and the drums while not terribly complex do have an authentic primitive quality that serves as the backbone for the riffs and solos.

It's truly a shame this album came in early 2021 because it is a perfect Halloween soundtrack. My final observation is that while this band does make use of past convention from all the styles and genres they incorporate, they do so with such confidence and passion that you don’t care about the Danzig and Death SS similarities. Overall Black Totem have made a rocking good time of an album with spooky vibes and that’s an alright thing in my book.